The Yellow Quartz Longsword is a straight sword in Dark Souls II.

A straight sword affixed with yellow quartz. This longsword was found in the Iron Keep. Breaks easily due to corrosion, but is light and still inflicts very significant damage.

In the Old Iron King's great iron keep was a vast collection of weapons, erected as a display of strength to the world. But they were lost when the king's conceit doomed the castle to sink into a lake of fire.

This sword can be purchased from Chancellor Wellager in Drangleic Castle for 8,000 souls or obtained as a pre-order bonus weapon.

This version of the Longsword has long reach, but low durability and scaling.

Due to the quartz covering the tip of the blade, it is no longer used for thrusts. It instead has the Broadsword moveset, composed entirely of slashes.

Reinforced with Titanite up to +10. 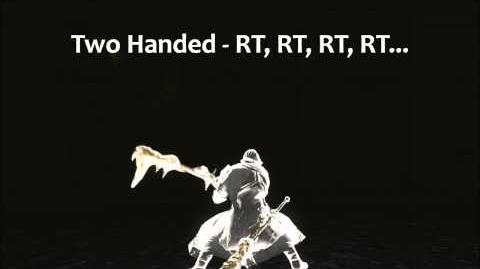