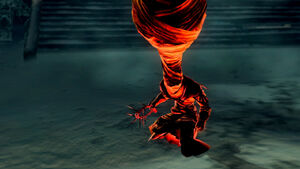 Xanthous King, Jeremiah is a character and phantom in Dark Souls.

Jeremiah invades in the Painted World of Ariamis, near the headstones in the area to the right of Phalanx from the bonfires.

Jeremiah invades as a red phantom with the express purpose of killing the player and nothing more. As with every other Red Phantom, Jeremiah will only invade if the player has reversed their Hollowing and has not killed the area boss.

Xanthous King, Jeremiah is known as the "legendary exile".[1] Although he bears the title of "King", it is unknown which kingdom he leads; little else is known about him.

As his corpse and phantom are both located in the Painted World, it's safe to assume that he was somehow trapped in the painting and unable to get out. He was probably killed by Priscilla as his corpse is found right next to her.

The fact that he utilizes Chaos Pyromancies suggests that he may have had a connection to the Witch of Izalith's Daughters of Chaos.[2][3][4]