Edit
watch 02:04
What is Witch of Izalith?
Do you like this video?
Play Sound 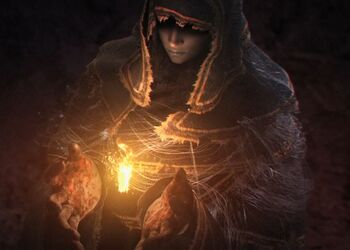 The Witch of Izalith is a mentioned character in Dark Souls and one of the original Four Lords who found the manifestation of disparity near the First Flame, along with Gwyn, Nito and the Furtive Pygmy. In a failed attempt to create a new Flame in response to the fading of the first one, she was responsible for the creation of the Flame of Chaos and the twisted Bed of Chaos — and thus the demons. She was the mother of Quelana, the mother of Pyromancy; of Queelag and her sister; and of the Ceaseless Discharge, originally her only male child.

Similar to the Furtive Pygmy, she is only seen once in the game, in the opening cutscene that shows her claiming her soul. In this scene, she appears to be a towering being with blue lips and ashen skin, hands burnt from extracting her soul from the First Flame. She wears a much more refined version of the clothes her children wear, and is visibly taller than both her children and the catalysts they used, likely being able to draw upon her soul without such a tool.

Her true name never being revealed in the series, the Witch of Izalith was one of the Lords, the four beings who discovered the manifestations of disparity near the First Flame. At some point after this, she became the mother of "The Witches of Chaos," who were thought to be her biological children. Giving pieces of her soul to her children, they joined in the war against the Dragons, and used their power to weave great firestorms to defeat them.

After this was over, she and her children are thought to have settled in their home city of Izalith, but whether or not she actually ruled the city is difficult to discern. In response to the fading of the First Flame, she attempted to use her Lord Soul to generate a new one. To this end, she generated a new flame in Izalith, known as the Flame of Chaos. Though she was initially able to manage the flame, her attempt to create an established component of the world - when it already existed - did not succeed, and the flame began to become unstable. Tangled by the hands of witches, none were able to calm the flame, and the Witch of Izalith was killed when it grew too fierce. Using her soul to fuel itself, it spread throughout Izalith, killing many of the citizens. It consumed her body, molding it into a seedbed, and from it the Chaos Flame manifested as the twisted being known as the Bed of Chaos.

From the Bed of Chaos, the flame used the Lord Soul to forge a parody of life itself, and birthed flaming creatures that would become known as Demons. Many who were taken by the Chaos Flame were transformed into demons of a similar but varied nature, and most of her children were taken as well. Her only son became a sorrowful, pustulating creature of Chaos flame, while two of her daughters managed to partially escape: Quelaag and Quelaag's Sister. Their lower bodies morphed into demonic spiders, but from the waist up they were spared, and Quelana managed to escape completely. The knights of Gwyn would battle the demons of Izalith, but were unsuccessful in defeating them, and instead took measures to prevent the majority of them from leaving the city. Many who had retained sanity after their corruption, such as the remaining Daughters of Chaos, are thought to have also consented to their imprisonment.

After a certain period, Quelana encountered a human named Salaman, who was able to perceive her form despite her nature. In virtue of this, she removed his natural human fear of flame, and taught him a method by which he could hope to control the uncontrollable power of fire. The teaching was successful and her pupils became the first pyromancer, and Quelana became the mother of Pyromancy. The pyromancies that were learned by Salaman manipulated lava, as they were learned from a Daughter of Chaos, but he would instead teach his students other methods of flame manipulation. His most accomplished pupil was Carmina, who was among the first to take pyromancy into fields that had almost absolutely nothing to do with flame, but rather life. Now most pyromancers, those that can manipulate both life and heat, reside within the Great Swamp and revere the Witch of Izalith and her children as their gods.

Despite the bed's eventual destruction, the Chaos Flame itself is said to have coalesced under the kingdom of Eleum Loyce, where it burned despite the efforts of the inhabitants. Eventually the Ivory King himself would descend into the flames, but he was corrupted as well.

In present time, both the bed and the flame have gone out, and the demons are now endangered due to their race no longer being generated. While some demons wandered the lands, with some communicating with the other races and working alongside them, such as the gatekeeper of Lothric, their own Chaos essence is burning fast. Many live to this day in a secret city of demons, found amidst Izalith's decrepit structures, most of its citizens being demons and corrupted Izalith citizens. The current ruler of the demon city sits alone amidst fallen combatants, with his flames dying out, the last of the original citizens of Izalith to have remembered the birth of Chaos, and the death of the Godmother of Pyromancy.