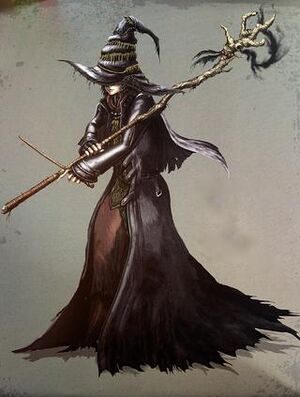 Witch Beatrice is a character and summonable white phantom in Dark Souls. She is a spellcaster providing some ranged Magic support for the player.

Beatrice appears as a summon sign under the staircase leading up to the Moonlight Butterfly (only if the player has had hollowing reversed).

Her summon sign is later found behind a pillar before the fog door leading to the Four Kings fight in the Abyss. The Moonlight Butterfly must be defeated with Beatrice's help for her sign to appear here.

Aside from being a summonable NPC for the boss fights labeled above, Witch Beatrice has no obvious contribution to the game through either story or gameplay, although her attire can be obtained.

After defeating the Four Kings, her robes and catalyst may be found on a corpse near the Firelink Shrine shortcut at the Valley of the Drakes.

During the Four Kings boss fight, Beatrice is close to becoming a hindrance to the player as her damage-per-second does not always provide enough output to quickly kill each King. On most occasions, since having an NPC increases a boss's health, having Beatrice summoned occasionally only benefits the player with a harder fight as her accuracy issues and time gaps in-between attacks gives players a much harder time killing the Four Kings.

She has a habit of occasionally not showing up for the Four Kings boss fight, this is not a bug or glitch. As soon as she is summoned, staying too long outside of the fog door will allow a ghost, to the player's right if they face the fog door, to aggro the player and Beatrice and because she has no transient curses, she will be stuck firing sorceries at the ghost and remain unable to assist in the boss fight until the ghost is killed.

Witch Beatrice is mentioned to be one of the few catalyst-users that did not hail from one of the Dragon Schools in Vinheim, setting her apart from other casters. She traveled to the Abyss but succumbed in her journey.[1]

Seen as a phantom

There is, in fact, a model for Beatrice as a child contained within Dark Souls' game files, which was removed from its final release. It is unknown what part Child Beatrice would have played in the Chosen Undead's quest. However, like most removed content, it is possible to add Child Beatrice to the game through third-party programs. As Dark Souls is heavily influenced by Berserk, it is possible that Child Beatrice is related to the character Schierke, as both are children, both are witches, wear similar attire and both are normally seen holding a staff.