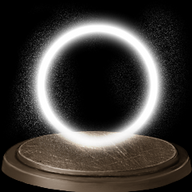 Followers of the Way of White, Lloyd's cleric knights are widely praised for their Undead hunts.[5] Covenant's warrior clerics are famous for being unyielding in battle.[6]

The Way of White is still known in Lothric, but also said to have undergone some changes, as original one is referred to as old Way of White.[7] Its followers have forgotten about Allfather Lloyd,[8] whose worship was once common among the Way of the White followers.[9] However, his Undead hunts are still carried on.[8] In the Way of White, there is a tradition of placing great faith in the words of the blind.[10]

The Way of White is now based in Carim, and now likely worships Velka, Goddess of Sin as its main deity.[10][11]

Garbs worn by Archdeacons of the Cathedral of the Deep were a sign of the Way of White's highest rank.[12]

Must not have killed Petrus of Thorolund and/or Reah of Thorolund if she was rescued from the Tomb of the Giants.

Players may join the Way of White by talking either to Petrus at the Firelink Shrine or Reah after you have rescued her from the Tomb of the Giants.

There are also rumors that it decreases the chances of being invaded, but without official confirmation it's impossible to confirm this due to various factors influencing invasions.

No penalty for betraying the covenant.

The Way of White is really only good for the early game for players who wish for early access to miracles. Later, all miracles become accessible to all players anyway, and the covenant loses any meaningful contributions it once had. If the player wants to stay in a co-op oriented covenant in the mid- or late-game, they should try becoming a Warrior of Sunlight or Princess's Guard, as those both offer miracles that will help while co-oping, as well as the matchmaking bonus.