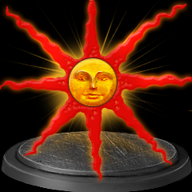 The player must have 25 (50 in the non-patched version) Faith. This requirement is lowered by 5 for every boss the player kills as a white phantom.

How to join[edit | edit source]

Once all requirements are met, the player may kneel in front of the broken statue on the balcony behind the Hellkite Dragon.

Warriors of Sunlight are watched over by Lord Gwyn's Firstborn, the former god of war who was stripped of his deific status.

Upon joining, players receive the Lightning Spear miracle, and can learn the Praise the Sun gesture. Players in this covenant will have an easier time co-oping with other Warriors of Sunlight, as well as Princess's Guards and members of the Way of White covenant. Also, Warriors of Sunlight will have a golden summon sign instead of a regular white summon sign, and appear as gold phantoms instead of white phantoms.

Further rewards are granted upon leveling up:

Discover the Warrior of Sunlight covenant

"Praise the Sun" gesture
Add a photo to this gallery
Retrieved from "https://darksouls.fandom.com/wiki/Warrior_of_Sunlight?oldid=328927"
Community content is available under CC-BY-SA unless otherwise noted.