Vordt served as an outrider knight, never far from the fleeting dancer.

Vordt is an armored man-turned-beast creature who guards the Wall of Lothric. He wields a large mace.

Found at the bottom of the High Wall of Lothric, opposite to the castle.

Vordt was once an Outrider Knight who served under Pontiff Sulyvahn and was one of many knights to receive the Pontiff's Left Eye, a bewitched ring that slowly transformed its wearer into a mindless beast.[1][2] Vordt served alongside the Dancer of the Boreal Valley until their transformation.[1]

Vordt spends the first half of the fight making sweeping attacks and overhead strikes. These are well telegraphed, so the window for dodging is quite large. Blocking these attacks may lead to large stamina loss, meaning dodging is often more viable.

Attacking in short bursts may prove more effective, as it allows the player to deal sufficient damage and keep enough stamina to dodge away.

Vordt's AI does not know what to do if you get directly behind him. If you take advantage of this after each charge in phase one then you can get him into a loop of trying to turn and face you. His turns have gaps in between them that give you the chance to put in some punishment. If you follow his butt you can end the first phase, no hits taken.

Though Vordt can't close gaps instantly, he is still capable of charging over open terrain. If he lowers himself closer to the ground, he will likely charge the player, at which point the attack can be typically be dodged as easily as running to either side.

When down to about half health, Vordt will be surrounded by a glittering mist. He will then use a charge attack which he repeats three times in a row, dashing from one side of the arena to the other, and then back and forth. Attempting to block may lead to death, as the back-to-back charges deal substantial damage. Dodging is the most efficient way to avoid these attacks.

Now is your cue to change tactics. Be aggressive after each charge burst, three hits then roll away. Rinse and repeat this strategy until he begins to load up his freeze breath, now you must run round behind him and punish as much as you can. Using this strategy the fight will be over in no time.

He also uses a new ability after each set of charges. At the end of the third charge, he will stomp and take a deep breath of icy air and breath it out as a stream of ice that damages the player and inflicts Frost. This ability is cast horizontally left-to-right across his body. Standing behind Vordt will allow the player to attack him while avoiding the Frost effect.

Vordt starts using new attacks during the second half of the fight, including several small, faster strikes. The faster strikes are easier to block but they can still easily break the player's guard without sufficient care for stamina management.

Often, rolling directly underneath Vordt works well for avoiding his big attacks. However, staying there may cause him to perform a body slam.

Although Vordt is found too early in the game for the player to get any substantial Frost resistance; in future NG+ playthroughs, achieving higher frost resistance helps avoid Frostbite status. 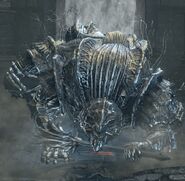 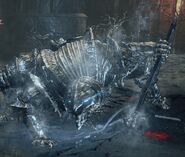 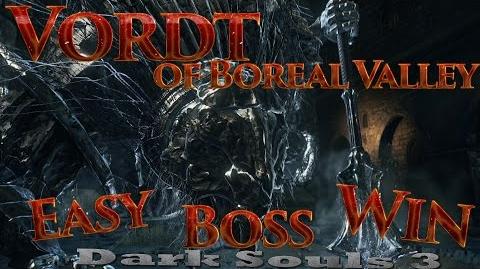 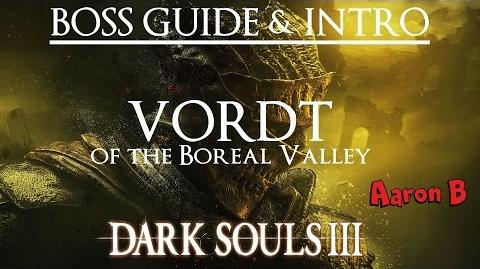 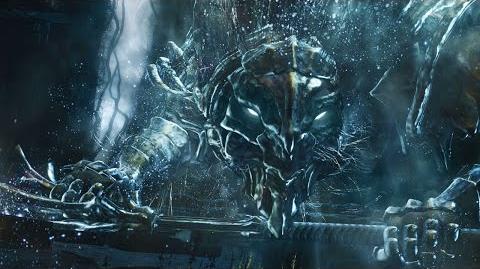 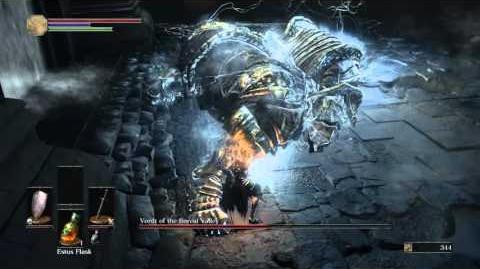