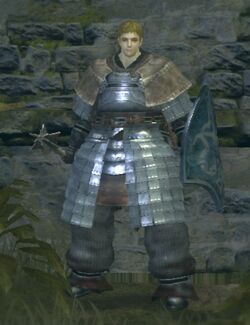 "Don't you dare meet M'lady like that. You might scare her off for good!"
— Vince of Thorolund

Vince of Thorolund is a minor character in Dark Souls. He is voiced by Adam Sopp, who also voiced Rickert of Vinheim, as well as the male Anri of Astora in Dark Souls III.

Vince and Nico are the bodyguards of Reah of Thorolund. He will appear with his companions in the Firelink Shrine after the player rings the first bell in the Undead Parish. Unlike his mumbling companion, Vince will have a brief conversation with the player. In it, he tells the player that his party are going on a quest, but reveals little more.

If the player does not exhaust all of his and Reah's dialogue, they will leave Firelink Shrine when the player defeats Pinwheel in The Catacombs.

The player next encounters Vince and Nico as Hollowed enemies in the Tomb of the Giants, in the pit that Patches kicks them into. The player must defeat them in order to rescue Reah.

Vince and Nico are pretty much straight melee fighters. They have above average health, hit fairly hard, and the fact that they fight together may cause problems for the player. The player must also fight them in near-pitch darkness; the Skull Lantern, Sunlight Maggot helmet, or the Cast Light sorcery will greatly aid players in this aspect. Vince casts miracles including Force and Heal. Force can disrupt your block and drain your stamina quickly, while letting heal get out of hand can make the fight go on for ages.

An alternative (and far easier) way of defeating the two is to lure them to the edge of the area where bone towers spawn. From here, using the 'force' miracle multiple times will force one, if not both of them, off the map, leaving the remaining one to be dealt with relative ease.