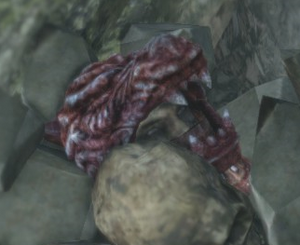 Vengarl of Forossa is a character and merchant in Dark Souls II. He is voiced by Jason Pitt, who also voiced the Bell Keeper of Alken, Satsuki in Demon's Souls and Valtr, Master of the League in Bloodborne.

Unlike all other characters in Dark Souls II, Vengarl of Forossa is composed of two parts: his disembodied head and his rampaging body. At one point, he was a brutal and bloodthirsty warrior, but his time alone has made him pensive and kind. As he was decapitated in battle, he still wears his ornate helmet, styled in the fashion of a wolf.

Long ago, Vengarl was a great warrior. Born in Forossa, he eventually became a soldier in the army fighting for the prince of Forossa. He cites the fall of Forossa as happening during his lifetime, being born before its collapse and a kingdom which he was tasked to defend.

When Forossa fell, Vengarl fled and became a mercenary. As time went on, his reputation as a vicious warrior grew. Even amongst his warrior troupe, which was noted as being especially brutal, he was avoided. During one battle, he was decapitated; instead of dying, however, he awoke after the battle was over. Ever since then, the silence of the woods has given him much time to think, and he spends all of his time doing such.

Upon entering the Shaded Woods, the player will happen upon a shrouded portion of the forest. In one of the corners of these woods, Vengarl's head can be found resting on a pile of rubble. At first, he will reject the player, stating that he doesn't want any business with the tribulations of war, battle or adventure. After further prompting, Vengarl will eventually offer mercantile services to the player.

If the player extends his dialogue, they learn that he was born in Forossa but he had to leave when the kingdom fell. He became a sellsword, but is ashamed of thinking only of war. Vengarl says that he sometimes dreams of his body and warns the player to avoid it at all costs. He will then thank the player for listening to his ramblings and award them with his helmet.

After defeating his headless body and returning to Vengarl, he will thank the player and make his weapons and shield available for purchase. He will also become an available summon for the Ancient Dragon, Throne Watcher and Defender, Nashandra, and Lud and Zallen boss battles.

Vengarl's body can be found in one of two different locations depending on the version of the game. In the original game, it will be waiting by the Primal Bonfire after defeating The Duke's Dear Freja. But in Scholar of the First Sin, it has been moved into the Shaded Ruins, in a room just past Manscorpion Tark's sand pit. At least one Fragrant Branch of Yore is needed to access it, regardless of direction of approach.

The body will wield Vengarl's scimitar and sword, and can deal tremendous damage with its combos. However, it is also slow to turn, allowing players to easily get around to backstab it. Upon defeat, the body will drop Vengarl's Set excluding the head piece, which is given to the player by Vengarl's head. 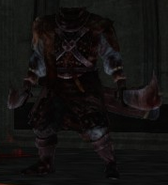 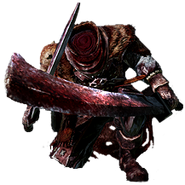 Artwork of Vengarl in his full form

Artwork of the body of Vengarl
Add a photo to this gallery
Retrieved from "https://darksouls.fandom.com/wiki/Vengarl_of_Forossa?oldid=328531"
Community content is available under CC-BY-SA unless otherwise noted.