Start a Wiki
watch 04:10
'Dark Souls II' - 30. Vendrick, King of Drangleic perfect battle
Do you like this video?

Vendrick, the once great king of Drangleic, built his great kingdom on the ruins of the other kingdoms that preceded his, and on the souls of the Great Ones. With the help of his brother, Lord Aldia, Drangleic prospered. The king favoured strength of arms, and soldiers who would stake their every battle on strength alone. Sorcery appears to have been tolerated, but the king held a low opinion of miracles.

According to legend, a mysterious woman named Nashandra, said to be of unparalleled beauty, came to Vendrick long ago and warned him of a looming threat across the seas, in the land of the Giants. King Vendrick named Nashandra his queen and crossed the ocean with her to combat the Giants. During this conflict, he pillaged the Giant's lands and took an unspecified amount of them captive to experiment on back in Drangleic. This experimentation gave Vendrick a better understanding of the nature of the soul and lead to the creation of the Golems.[1][2] Using this acquired power, Vendrick created various types of Golems, who in turn built Drangleic Castle.[2] With Nashandra at his side, Drangleic entered a prolonged period of peace and prosperity.

The peace would eventually be broken, however. Seeking vengeance for the subjugation of his kingdom, the King of the Giants amassed an army in a vengeful counter-invasion of Drangleic. He also sought to avenge the deaths and horrendous treatment of the captive Giants Vendrick took.[3] Unwilling to forgive the actions of Vendrick, the Giants crossed the sea and landed on the northern shores of Drangleic. They set siege to Drangleic Castle and relentlessly attacked various settlements, forts and keeps across the land for several generations.[4][1]

Battles waged endlessly between Vendrick's forces and the Giants, and much of Drangleic's citizens fled the kingdom to escape the conflict. Ultimately, the Giants were defeated after their king was slain by an unnamed hero.[5] In the aftermath, much of Drangleic had been reduced to rubble and visitors to the kingdom were rare.[6]

Already weakened by the Giants, the kingdom then became afflicted by the fading of the First Flame and with it, the advent of the Undead Curse. Vendrick was desperate to find a way to cure the Undead Curse. He and his brother Aldia researched into the nature of the soul itself in a desperate attempt to find a cure. As delaying measures, Vendrick used a great soul to keep the curse at bay, and began sending the undead away to a far away land, to rid his kingdom of them. Vendrick refused to relight the First Flame and also rejected the idea that the fading of the flames and the rise of dark would bring about the true Age of Man. Instead, Vendrick searched for a third path. All his attempts would fail however, and eventually he realised that his beloved queen Nashandra was in fact a child of the Father of the Abyss. Nashandra coveted the First Flame and the Great Soul, and Vendrick, in order to prevent her from realising her dark plans, went into exile in the Undead Crypt, after ensuring that Nashandra would have no path to the flame.

Alongside a contingent of knights and his loyal right hand Velstadt, Vendrick traveled to the Undead Crypt. Having separated himself from his great soul, the king soon became Hollow and walks the halls aimlessly.

Upon entering the Undead Crypt and defeating Velstadt, the Bearer of the Curse encounters the king, merely a shell of his former self. They may choose to spare the king, leaving him to wander endlessly, or slay him and end his misery.

Vendrick has very high defense which likely will make this a very lengthy fight. His defense can be considerably lowered, however, by collecting up to five Souls of a Giant found throughout Drangleic. Each Soul of a Giant halves his defense. Without any souls, he has 32 times his base defense and takes almost negligible damage per hit. Even with the Souls of a Giant, Vendrick is not to be taken lightly. His attacks deal heavy damage, have good reach, and can stagger players who roll too early because of the windup for each one.

Vendrick holds his sword with the blade dragging behind him even as he winds up for the horizontal slash attacks. Staying close to him and strafing to his left will make it very hard for him to hit the player. He will sometimes jump back to put distance between him and the player. If he backs up into a wall, the player may back up in an attempt to get behind him again. Keeping a good shield in your inventory can help, but not always, as most of Vendrick's attacks have extremely high stamina damage.

A good way to approach the fight is to stay directly behind or next to his left foot. If he gets too close to a wall where any part of the player or him is bumping into it, try to lure him back out toward the center of the arena.

Swiping: Swipes his sword across the ground two or three times in a row. This is his deadliest attack, as if it hits the player's shield it will drain all stamina and the player will then by severely damaged or killed by the following swing. Hugging his left foot while causes the attack to completely swing over the player's head, but rolling through the attacks works well too if the player learns Vendrick's moveset and timing.

Overhead Sword Slam: Raises his sword up and slams it onto the ground, sometimes done twice or even three times in a row. Easy to dodge by staying as close to him as possible.

Jump Attack: Will jump towards the player and slam his sword into the ground where they were standing the moment he jumped. There's a clear wind-up and it is fairly easy to dodge by moving out of the way when he gets airborne.

Single Sword Swing: Will swing the sword horizontally towards the player once, it has a long reach, and a slow wind-up that is exactly the same as the swiping. Fairly easy to dodge by sprinting towards his left side. He will also do this is the player is far away and will most likely kill them if their back is turned.

Charge: If the player starts really distancing themselves from Vendrick where he can not hit them with his swing, he will pick up speed. He will move much faster than his normal slow meander and will most likely catch the player off guard if they were healing or buffing their weapon. The best way to handle this is, if one has a shield, to raise it and sprint towards his left side. If one doesn't have a shield, sprint towards his left side and be prepared to roll for your life.

Curse Orb: Upon crossing the fog wall, Vendrick will scream and throw a dark red orb at the player, inflicting instant curse if it connects.

These stats have been estimated through various formulae, and as such, may not be precise.Note that the defenses are based on when the player has five Giant Souls.

Vendrick will not drop anything except the given amount of souls when he dies. However, his Soul of the King and his armor set can be found in the Shrine of Amana, behind a door that can only be opened after defeating him. The door is in the area between the first and second hut where the player can find a pathway leading to the door, however, they must be in human form to open it.

Using a Bonfire Ascetic instead of going to NG+ will not spawn these items anew in the Shrine of Amana. 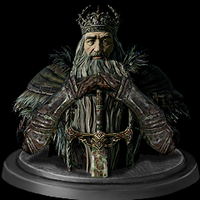 Vendrick in hollow form
Add a photo to this gallery

Retrieved from "https://darksouls.fandom.com/wiki/Vendrick?oldid=322054"
Community content is available under CC-BY-SA unless otherwise noted.