Velstadt can be found in the Undead Crypt. In order to get to him the player must pass through a long corridor with indestructible tombstones that spawn spirits. However, if you drop down from the first staircase and go under the stairway, there is a hollow there that you can kill to keep the bell from being rung and the shades will not spawn.

He is a large knight wielding a massive hammer, guarding the door to Vendrick.

Velstadt was King Vendrick's right-hand man, along with Raime, and one of his most loyal knights as well as the Commander of his forces. At some point, Velstadt and Raime quarreled, ending with Raime being declared a traitor and leaving the King's service. Velstadt would always be by his king's side and followed him to the Undead Crypt when he fled Drangleic Castle. Despite Vendrick's hollowed state, Velstadt remains, protecting his liege and serving as the king's last line of defense.

Included in the Scholar of the First Sin update, it is implied that Velstadt was from Shulva, but left before the Drakeblood Knights attacked.

After exhausting his dialogue, Grave Warden Agdayne can be summoned. His sign is behind the second-to-last statue on the left.

In Scholar of the First Sin, Devotee Scarlett can be summoned in the room with the Leydia Witches, before the room with Grave Warden Agdayne.

His attacks are mostly made up of hammer strikes and occasionally some spells that are either offensive or improve his attack power. Dodging well can prove effective in this battle, as his hammer causes pretty high stamina damage and almost all of his attacks are in combos of 2-3 strikes. Be careful when behind him since he does a 180 degree turn and swings his hammer.

When he has lost about a third of his health he will enter in a kneel position and will cast a self-buff for around 7 seconds. This is a good opportunity to wail on him, buff a weapon, or heal because he will not be able to interrupt the player. The buff will cause him to receive less damage and cause more damage. Once buffed, he also gains a Dark magic attack which fires several orbs in a wide angle, any of the orbs that come near the player will home in on them, however, they can be rolled through. If one of the orbs hits the player, it will likely be fatal. Ranged builds can take advantage of this, firing before and after his spells, then dodging once he casts them. Velstadt is also very vulnerable when casting this spell, as it takes several seconds to charge and the orbs do not home in on the player, meaning that a melee build could both heal and run behind Velstadt while also landing a couple of strikes on him while he is preparing. Be warned: if the player stays behind him too long after he casts the spell, he will likely use a swerving hammer swing behind him that can do a fair amount of damage.

Using fire damage and lightning damage is very effective for this boss, while a hex build and dark magic is not as effective, since his armor has high dark defense so magic might prove more beneficial than hexes and dark. Also while he is on knees preparing to fire his dark orb attack it is safe to hurry and get behind him for the orbs will only shoot out in a frontal cone. If you find yourself not enough time to get behind him then try your best to roll forward through the orbs he fires or stand behind a pillar that has not been broken from the mayhem yet.

Overhead Slam: Holds his weapon above his head and slams it to the ground, sometimes if the player has made some distance between him, he will charge at the player holding his weapon over his head and performing an overhead slam. He tracks fairly well, so dodging early will result in getting hit. Like many of his attacks, dodge at the last second to avoid them completely.

Lunge: Thrusts his weapon at the player. Has a deceptively long range, and can hit players who have not retreated far back enough, though it can be dodged by rolling to the side. Has a long recovery time and can provide an opportunity to heal or attack.

Double hit: Swings his hammer horizontally twice in a row. The back-swing can still hit the player if he/she has dodged towards his back.

Dark Buff: If the player has done high damage to him in a short amount of time, he will kneel down with his hammer and will buff himself. During the casting he will be vulnerable to attacks, though he will take decreased damage. After performing the buff, he will have increased damage and a new ranged attack. This move is also similar to Knight Artorias' "Wrath of the Abyss" buff, although it is not possible to stagger Velstadt out of this one.

Dark Orbs: While the player is at range from him, he will ring his chime twice, kneel down and perform a dark orb attack, which fires several at a time. This attack can be easily evaded by moving behind him and getting some free hits, however he will continue tracking players until a short period before firing the orbs so be sure to keep moving to stay behind him. If he backs up against a wall, the orbs can be rolled through with enough Adaptability or blocked by pillars.

Back slash: While the player is behind him but at his weapon side, he will swing his hammer backwards towards the player. He gives very little tell beforehand, so this move can catch many off guard.

Two-Hand Swipe: Grips his hammer with two hands and performs one horizontal swipe. Can be dodged by rolling towards the swing. Will sometimes follow up with another attack if the player is within range.

Velstadt (prior to self buff)

Render of Velstadt from the official guide.

Velstadt prepares to fight the player. 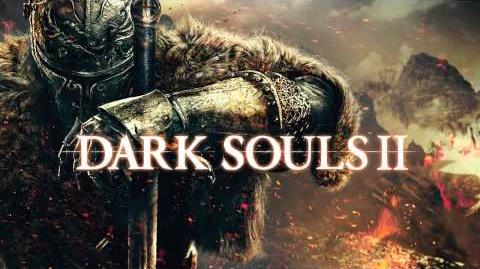 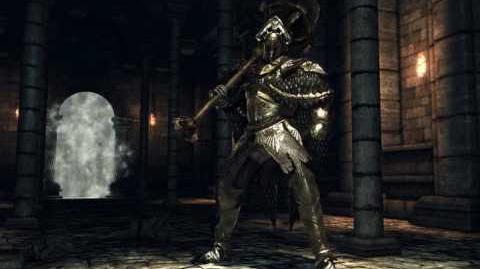