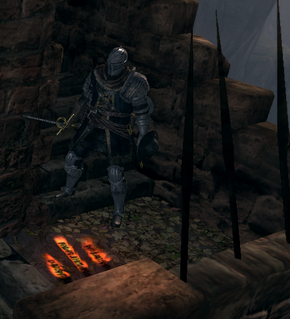 Prince Ricard is a hollowed enemy found near the top of a tower in the latter half of Sen's Fortress, beyond the Berenike Knight.

He does not respawn when killed.

Even though his armor implies that Ricard was from Astora[1], he is likely a member of Balder's royal family. Ricard journeyed through different lands for a long time until he eventually Hollowed in Lordran.[2]

Ricard wields his Rapier and Buckler for close-range combat, and a Longbow for distant targets. He can parry and riposte attacks. His attacks deal fairly low damage, giving the player a lot of room for error.

Retrieved from "https://darksouls.fandom.com/wiki/Undead_Prince_Ricard?oldid=326351"
Community content is available under CC-BY-SA unless otherwise noted.