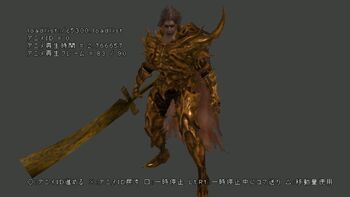 "Undead King Ja-Yearl"[1] is an unofficially named boss which was removed from the final release of Dark Souls.

It is unknown where Ja-Yearl was supposed to be located in the game; however, it is possible that he was going to be located in the New Londo Ruins and had to be defeated in order for Ingward to present the player with the Key to the Seal. In addition to this, upon his defeat, the Undead King Set probably would have been made available to the player, either through Domhnall of Zena or some other means. For an unknown reason, Ja-Yearl's model does not don his crown.

Retrieved from "https://darksouls.fandom.com/wiki/Undead_King_Jar-Eel?oldid=327237"
Community content is available under CC-BY-SA unless otherwise noted.