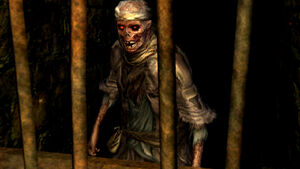 "Oh, there you are, dearie! A pleasure to see you again. Vee hee hee!"
— Undead Female Merchant

The Undead Female Merchant is a character and a merchant in Dark Souls. As with her male counterpart, she is nearly Hollow and has lost some of her sanity. She is voiced by Clare Corbett, who also voiced Gwynevere, Princess of Sunlight and Priscilla the Crossbreed.

Located in the Undead Burg, behind bars at the end of the long aqueduct connecting Lower Undead Burg and Firelink Shrine. If one continues along the water duct she is in, the previously locked gate can be opened to create a shortcut to Firelink Shrine.

The Undead Female Merchant sells various items to the player, including Purple Moss Clumps, Charcoal Pine Resin and Purging Stones. Thus, it is useful to pay her a visit before visiting the Depths and/or Blighttown, where Poison and Curse are common.

As with the Undead Male Merchant, the Undead Female Merchant was abused back in her homeland and claims to be glad to be out of there. After she left her homeland, she became a travelling merchant.[1] She awkwardly flirts with the player and accuses them of believing that she has gone mad "like the others".[2]

If the Undead Female Merchant is attacked, she will retreat out of range. She will curse and taunt the player, and refuse to sell any more items. However, she can be killed if the player kills her in one hit.