The Uchigatana is a katana in Dark Souls III.

A unique katana characterized by the fine craftsmanship of an eastern land where it was forged.

The finely-sharpened blade cuts flesh like butter and causes bleeding, but breaks easily as a result.

Skill: Hold
Assume a holding stance to rapidly execute a lunging slash with normal attack, or a deflecting parry with strong attack.

Guaranteed drop from the Sword Master in the Cemetery of Ash. He can be found by taking the left path, just before the main entrance to Firelink Shrine.

Even though he is found early in the game, he is quite strong and has a fair amount of health. An easy way to kill him is to knock him off a ledge. If that's the case, resting at the nearby bonfire will make his weapon appear at his spawning spot, at the top of the stairs.

The Uchigatana's attacks are fast and can stun most smaller enemies. Its weak attack (

) is a vertical swing followed by a reversed, uppercut swing. Its strong attack (

) is a horizontal slash that is capable of hitting many targets at once, although the player is left open afterward.

The Uchigatana's skill is called "Stance." While in this mode, the wielder sheaths the sword while keeping their hand on the hilt, prepared for a quick draw. The light and heavy attacks are altered and will consume FP when used; the light attack (

) becomes a charging quick-draw slash and the strong attack (

It is the earliest attainable katana in the game, and thus is a good early weapon for Dexterity builds. However, it is eventually outclassed by other katanas later in the game. 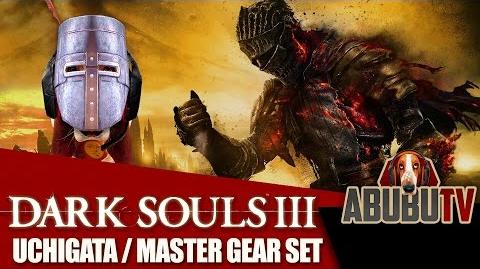 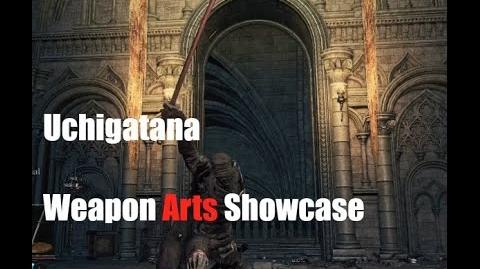