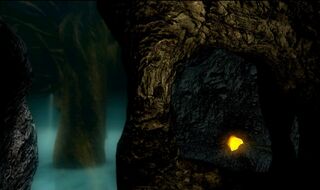 The Tomb of the Giants is a location in Dark Souls.

The Tomb of the Giants can be accessed through The Catacombs, after defeating Pinwheel and climbing two hidden ladders out of his room.

Much of the Tomb of the Giants is pitch-black, making it particularly difficult for players to traverse without a light source such as the Sorcery Cast Light, the Sunlight Maggot helmet, or the offhand item Skull Lantern.

There are three bonfires in the Tomb of the Giants. Two act as warping points.

The enemies in the Tomb deal high damage; in particular, the Skeletal Beasts can kill near-instantaneously with their fast attacks and the Giant Skeletons and their archer counterparts cause heavy knockback, which may cause players to fall off the various precipices to their doom. Thankfully, nearly all the creatures in the Tomb of the Giants have very short aggro range, which means that if players do have a light source (or can see their glowing eyes in the dark) then they can be the first to attack or attempt evasive maneuvers.

Retrieved from "https://darksouls.fandom.com/wiki/Tomb_of_the_Giants?oldid=326821"
Community content is available under CC-BY-SA unless otherwise noted.