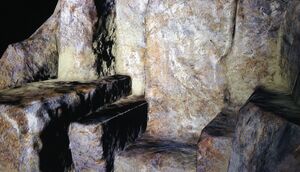 The Throne of Want is a location in Dark Souls II.

The true throne of Drangleic, hidden away deep beneath Drangleic Castle in a great cavern accessible only to those with the symbol of the King. A long, jagged pathway extending down from the final gate in the depths of the castle leads to a kiln guarded by the last of Vendrick's guardians, the Throne Watcher and Defender. These warriors serve as the last bulwark against Nashandra claming the throne, and by extension, gaining the power of the First Flame.

The actual throne takes the form of a great stone slab carved into the form of a throne, surrounded by a kiln of ash-covered stone, across a gap filled with Golems that aid the true monarch to their rightful place

The Throne of Want serves as a mean to link the First Flame, in a way similar to the thrones of Lothrics’s Firelink Shrine, as it is built inside a kiln and the ashes that cover it seems to indicate the remains of previous Lords of Cinder.

While it’s exacts origins are unknown, the structure and ashes surrounding the Throne imply that it is much more ancient than the Kingdom of Drangleic.

According to Vendrick and Nashandra, once Vendrick sougth the fire, for he believed that by linking it he could end the Undead Curse. But he would later discover that this was a lie, since the flame would fade again and the curse return every time, he then refused to sit on the Throne and decided to search for a permanent way to end the curse.

At a certain moment during his reign, Nashandra came to Drangleic, she coveted the Throne of Want and the power of the First Flame, and seduced Vendrinck in order to use him as a mean to accomplish her goal, becoming his queen.

Much time later, after Drangleic was ravaged due to both the war with the Giants and the undead curse, which all of Vendrick’s and Aldia’s plans to cure were in vain, Vendrick found out about Nashandra's plan: to use the throne to claim the First Flame for herself. Vendrick reacted quickly and sent the Throne Watcher and the Throne Defender to guard the throne. He then fled to the Undead Crypt, where he eventually went Hollow, to keep his ring and soul from the wrong hands. He did all this in an attempt to stop Nashandra.

The Throne of Want is the final location in Dark Souls II, where the Bearer of the Curse must best the Throne Watcher and Defender and Nashandra to become a true monarch and claim the Throne. However, if the player has killed Vendrick before Nashandra, Aldia will appear as the final boss.

The Emerald Herald also makes an appearance at the Throne’s entrance where she reveals her true name. In the aftermath, either she or Aldia will narrate the game’s ending.

The area can only be accessed through use of the King's Ring. And the throne itself and only be reached with the Giant's Kinship.