The Thorned Greatsword is a greatsword in Dark Souls II.

A greatsword forged from the soul of the Looking Glass Knight. Strong attack unleashes its latent power.

Fearing something wicked, the King fled the castle and never returned. But his warrior, forever true to his command, stands ready to expunge those who would challenge him.

The Thorned Greatsword is obtained after trading the Looking Glass Knight Soul with Weaponsmith Ornifex for 3,000 souls.

The Thorned Greatsword is a strong weapon that can adapt to many situations due to its solid damage output and relatively strong, and quick, projectile attack.

The strong attack unleashes an arc of lightning visually identical to a Sunlight Spear, at the cost of 10 durability per cast. This makes the special attack usable up to eight times before it breaks on the ninth use, although it can be used up to 17 times, breaking on the 18th, with the Bracing Knuckle Ring +2.

The projectile is functionally identical to the Lightning Spear variants, although weaker. This makes it great for punishing healing attempts in PvP as it can be fired considerably quicker than a Lightning Spear and still does respectable damage. Additionally, hitting any opponent with both the projectile and the blade itself whilst using the special attack will inflict exceptionally high damage.

The moveset is the same as the Drangleic Sword, except for the heavy attacks, which are switched out for quickly shooting a weak lightning spear, similarly to the Dragonslayer Spear. 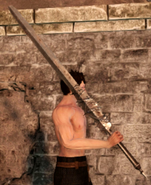 In-game
Add a photo to this gallery
Retrieved from "https://darksouls.fandom.com/wiki/Thorned_Greatsword?oldid=328650"
Community content is available under CC-BY-SA unless otherwise noted.