The Rotten is a boss in Dark Souls II.

He is a huge mass of undead that have fused together, forming a single creature. A Hollow on the top left shoulder of the Rotten seems to be telegraphing the whole entity's movements and attacks.

The Rotten is located in the Black Gulch. After seemingly failing to put the head of a statue back on its body, he becomes enraged and proceeds to focus his attention onto the player.

Throughout the fight, the Rotten will alternate between using his cleaver and using his empty hand. His cleaver deals heavy damage and can send the player flying or easily stun-lock the player and break their guard. The hand has two moves; a frontal smash and a grab. The grab does damage twice; the initial damage is from the grab itself and the second portion of the damage comes when the Rotten wrings the player out like a rag.

During the fight, players would do well to avoid the flaming patches throughout the arena as they can deal heavy damage over a short period of time. Casting Flash Sweat before entering the fog wall can help mitigate the damage.

The Rotten attacks with its cleaver by performing a heavy downward slash, two quicker downward slashes followed by a third heavy slash with slight windup, or horizontal slashes. Dodging toward his right side is a good idea as the player risks being hit by the blade by rolling away from him toward the left.

While not particularly slow, running away from The Rotten will give the player sufficient time to cast a self-buff or heal. This small period can be used to cast Flash Sweat and avoid the fire damage from the burning pits, Strong Magic Shield to counter the dark damage it deals after half its health has been lost, or apply a weapon buff.

After losing about half of its health, the Rotten will begin using ranged attacks that deal heavy dark damage. One travels in a straight line after a heavy downward slash, while the other is an area of effect attack. The Rotten will be vulnerable for a short time after each attack, giving ample time to switch to offense. With the Old Leo Ring and a thrusting weapon equipped, this fight can end very quickly soon after.

Dealing enough damage to one of the arms will sever it, but it will regenerate after some time. If the player manages to cut off the left arm, they will be rewarded with a Lockstone.

With magic, the player should keep their distance from the Rotten, and should only cast while the Rotten recovers from its attacks.

The Rotten confronts the Bearer of the Curse

Cut Soul of the Rotten description.
Add a photo to this gallery 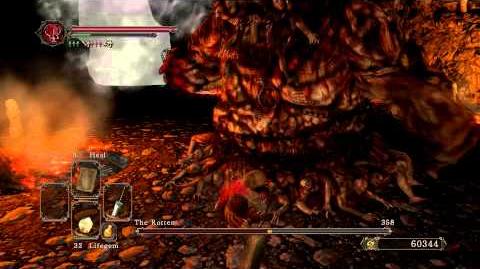 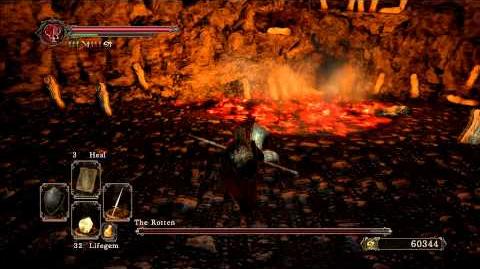 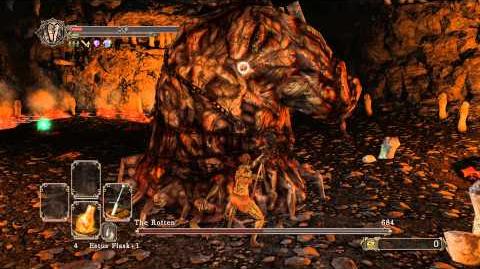 Retrieved from "https://darksouls.fandom.com/wiki/The_Rotten?oldid=327611"
Community content is available under CC-BY-SA unless otherwise noted.