Edit
watch 04:11
'Dark Souls II' - 2. The Pursuer perfect battle
Do you like this video?
Play Sound

Not to be confused with Pursuers.

The Pursuer is an optional boss and later an enemy in Dark Souls II.

The Pursuer is a mysterious figure who relentlessly hunts the Bearer of the Curse. The Pursuer tracks the Bearer to the Forest of Fallen Giants, The Lost Bastille, the Iron Keep and lastly Drangleic Castle.

The Pursuer is a large hulking knight who hunts down those who bear the undead curse, possibly to atone for past sins committed.[1] Wielding an ultra greatsword renowned for being one of the mightiest of its design,[2] the Pursuer will relentlessly stalk its target until slain. It is unknown if the Pursuer served under King Vendrick, as did many other knights, or if it acted off of its own accord.

Scholar of the First Sin[]

In Scholar of the First Sin, there are several new Pursuers in addition to the ones in the main game.

One of the NG+ Pursuers in Drangleic Castle's throne room spawns already-buffed by his Curse Stab.

Charge
At a distance, the Pursuer will charge at the player with an upward strike. The easiest way to avoid, is walking to the right as soon as the animation starts.

3 Hit Combo
Performs two horizontal swipes and if all attacks are performed while the player is still near him, will follow it up with a full 360° spin attack or an overhead smash.

Shield Bash
He uses his shield and hits the player once with it, causes large stamina drain if blocked.

Curse Stab
The Pursuer's Blade glows blue and he lunges the sword at the player, if it connects, the player will be in an animation where they are impaled on his sword and the player will then be cursed. This attack cannot be blocked. The hitbox lingers for some time, so while the attack's long windup and low tracking makes it easy to avoid, one can also accidentally walk back into it after dodging it.

Dark Seeker Projectiles
The Pursuer will lift into the air and vent Dark energy from its body. This will cause 3 to 5 projectiles to exit its body and fire towards the player after a short delay, similar to the Affinity Hex. The projectiles are slow but track extremely well and deal a moderate amount of damage. Typically, this attack occurs after he has dropped below 50% health, but on rare occasion it can happen before. To avoid it, simply run behind the Pursuer as soon as he starts casting it.

Spread Projectiles
Similar to the Seeker Projectiles this attack starts with the same animation, but it fires several waves of spreading hex like attacks. These attacks can be dodged by rolling backwards away from the Pursuer and the next attacks will follow the relative direction of the first blast. (the attack has a similar look to the Hex Dark Hail, but lighter in color).

Energy Blast
Swings his sword and produces an energy blast in the players direction. The Pursuer in Iron Keep cannot use this move. [citation needed]

Combo 2
While blocking with his greatshield, quickly thrusts his weapon twice. He then swings his sword like a whirlwind while ascending a little from the ground.

The Pursuer's combos mainly come in threes, with the third strike leaving him vulnerable to a few hits afterwards.

Although the Pursuer is an agile opponent, parrying him immobilizes him for several seconds. This allows ample time for a counterattack, and more importantly allows the player to employ ballistae against him. On NG, if all three ballista bolts hit, 90% of his health can be taken out. A sizable chunk of his health is taken off even if not all of the bolts hit. The Buckler received just before the second bonfire in the forest will make parrying easier.

Note that the Pursuer can be poisoned with weapons or two casts of the pyromancy Poison Mist. Having two weapons at your disposal is a good way to poison him then switch to your more powerful weapon, Poison Ricard's Rapier +10 with two strong attacks will poison him, hence then switching to your main weapon for further damage is a good strategy. At the start of the fight, you have time before he fully materializes to initiate a poison.

Most of his attacks can be evaded if the player rolls to the right (his shielded side). However, this is not advised when he uses his three-hit combo as the spinning slash can still strike the player from the side. In particular, running away to bait his charge and then dodging through it, followed by an attack (Don't use the rolling attack, as it will most likely miss) is a very good tactic, so long as the player knows what the window of invincibility is for their character. (I-Frames)

For the third encounter in Drangleic Castle, an easier way of obtaining the Ring of Blades +2 is to defeat one of the Pursuers, return to the King's Gate bonfire, then go back for a one-on-one battle against the second Pursuer.

The Pursuer enters the arena 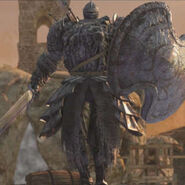 Pursuer in Forest of Fallen Giants

Pursuer in the Iron Keep

Immobile Pursuer with the Bearer of the Curse 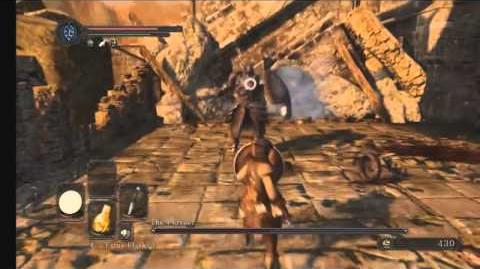 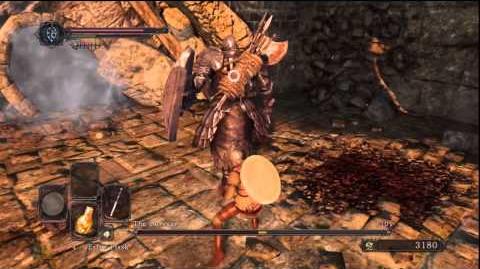 Dark Souls II How To Beat The Pursuer 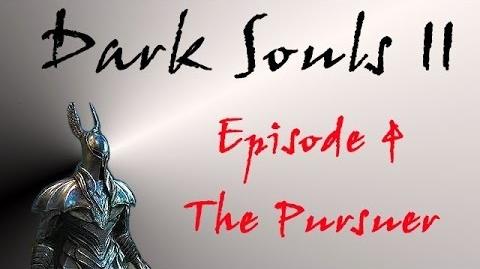 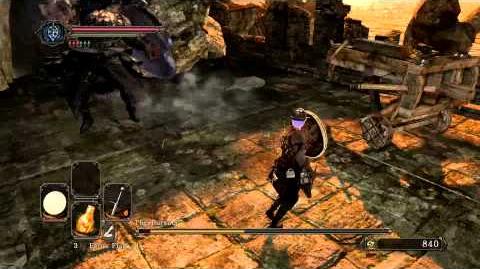