View source
watch 01:48
What is The Nameless King?
Do you like this video?
Play Sound

The Nameless King was once a dragon-slaying god of war, before he sacrificed everything to ally himself with the ancient dragons.[1]

Found in Archdragon Peak, summoned by ringing the bell of the Great Belfry.

The Nameless King was a dragon-slaying god of war[1] in the Age of the Gods and heir to lightning,[2] until he sacrificed everything to ally with the ancient dragons.[1] He tamed a Stormdrake and formed a close bond with it,[3] leading it to countless battles.[4] He is a former king.[3] However, it is not known which kingdom he was the king of.

Dragonslayer Ornstein, another relic of the Age of Gods, left the ruined cathedral Anor Londo he once guarded in search of the Nameless King.[5]

It is heavily implied that the Nameless King is the long-speculated firstborn child of Gwyn, Lord of Sunlight.

Phase 1: King of the Storm

The fight begins with the Nameless King entering on his mount from the midway point of the arena. He then proceeds to attack the player through either swipes and slams from his spear. Lightning bolts during flight and flames fired from his mount. Both have two qualifiers; one being that he touches down nearby the player and sprays a swatch of fire in their direction, to cover a large area. The other being when the player stays under the mounts body and is reminiscent of the Ancient Dragons attack of flying straight up and flooding the area under him with a long burst of fire. This can easily kill the player as it will stun them in the first hit, knocking them down and, hit them once again as they recover. All attacks should either be leveled at the mounts head, or the rider himself. Several attacks are enough to stagger the mount long enough for a critical, or if one has sufficient int/faith. A spell can be used to possibly once shot the rider. A Sunlight Spear and standard charm were enough to accomplish this task on NG+1.

The Nameless King will dismount and absorb the strength of his mount after it is defeated. His attacks will be dragged out when going after the player. Usually catching an unprepared fighter off guard as they roll too early and are struck for heavy damage. Which on later a play through, can nearly one hit the player in several instances. His attacks will either be followed with large burst of wind, or lightning and he also possesses several attacks that can release ranged bolts on the player. Along with a grab that can travel up to 20 units in the player's direction.

It is advised that the player wait for him to finish his attacks before attacking him during his recovery from the combo, or strike him when he is stuck telegraphing his more powerful maneuvers.

The Nameless King calling down lightning upon the Unkindled. 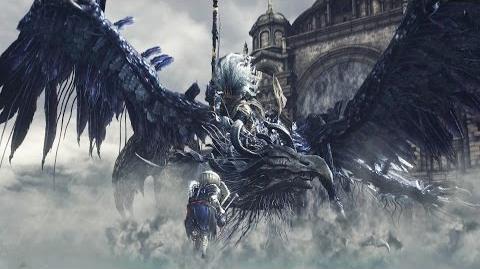 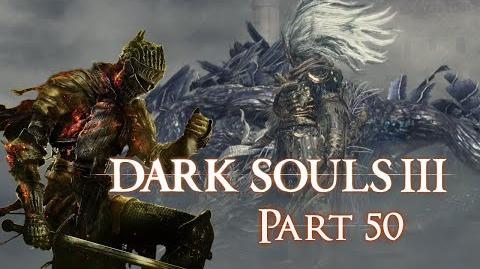