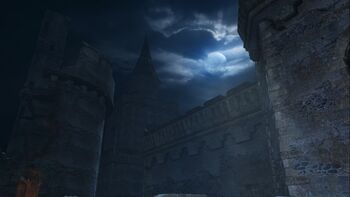 The Lost Bastille is a location in Dark Souls II.

The Lost Bastille is a large, aged prison containing dozens of imprisoned hollows exiled by the King of Drangleic. This area can be confusing to new players, although it becomes easier once The Pursuer has been defeated due to the new bonfire access.

The Lost Bastille can be accessed from the Forest of Fallen Giants via the bird's nest found past the Pursuer's boss chamber or via the ship accessible in No-man's Wharf.

Note that a gate prevents access to a portion of the Lost Bastille if the player arrives from the Forest of Fallen Giants. There are two ways to get to the other side of the gate without going through No-man's Wharf. The first being by obtaining the Antiquated Key and opening the door found left of the well with a cage containing three Undead Citizens. The second way is by falling off the wall through the hidden door in the room right past the set of two gates while wearing the Silvercat Ring and having around 1,100 HP.

The Lost Bastille eventually leads to Sinners' Rise, terminating with the boss fight there.