Start a Wiki
watch 03:08
'Dark Souls' Lore: Taurus Demon
Do you like this video?

Taurus Demons, also known as bull demons, are enemies in Dark Souls. One is first encountered as an optional boss in the Undead Burg and weaker variants later appear in the Demon Ruins as both non-respawning and respawning enemies.

A Taurus Demon is first encountered in the Undead Burg as an optional boss that the player can defeat. It is located in the upper section of the Burg. Later, however, additional weaker Taurus Demons can be found in the Demon Ruins as regular enemies. A group of seven Taurus Demons notably inhabits the latter area.

Taurus Demons wield Demon's Greataxes, weapons carved from the bones of fellow demons. They are large, minotaur-like monsters covered in brown fur. Alongside their yellow eyes, large horns protrude out of their skeletal heads and a tail hangs between their legs.

Taurus Demons[1] were demons that were most likely created when the Witch of Izalith attempted to duplicate the First Flame using a Lord Soul. The attempt was unsuccessful and accidentally created the Bed of Chaos, the mother and source of all demons.[2] Taurus Demons were classed as lesser demons.[3] One eventually inhabited the upper section of the Undead Burg, a fortified town that devolved into ruin. Meanwhile, others came to house the area known as the Demon Ruins, the gateway to Lost Izalith.[1]

The Chosen Undead encountered the aforementioned lone Taurus Demon, when they explored the Undead Burg on their pilgrimage, and promptly slew the beast in combat. The Undead Male Merchant referred to it as a "bull demon" when he remarked about the Burg's treacherous nature. Later, the Chosen Undead came across more Taurus Demons when they journeyed through the Demon Ruins to reach the fallen city of Lost Izalith.[1]

A quick method to defeating the boss version of this creature is to climb the tower's ladder next to the entrance and perform a plunging attack from above. The player should eliminate the two Undead Soldiers guarding the tower before triggering the boss or they will get in the way. Caution is advised as the Taurus Demon can hurt the player while they are climbing if they are too slow. It can also jump up to the tower if the player stays up there for too long. This can be used to the player's advantage though, as it gives the player time to climb back down the ladder. Once the Taurus Demon climbs back down, a quick climb to the top and a few firebombs quickly dispatches the boss. While running back, the player can safely attack its legs to do additional damage. The player can also use Gold Pine Resin in conjunction with this strategy to increase damage.

If the player decides to take this boss head on, the player can avoid all of its attacks by running between the demon's legs. It is also worth noting that the demon can accidentally fall off the side of the arena. This is more likely to happen when it is on the tower roof and when it performs a Jumping Pound.

The respawning and non-respawning enemies in the Demon Ruins are notable for their extreme aggro range. Care must be taken to avoid fighting several simultaneously, especially in the area surrounding the Chaos Flame Ember. With careful positioning, the respawning demon before the Firesage Demon can be dispatched with plunging attacks.

At the start of this attack the Demon will draw back its weapon briefly, before initiating a huge swing across a horizontal arc in front of it. This attack does not have very much range, so it can easily be evaded by backstepping once you see it draw its weapon back. Alternatively, you can roll towards the Demon and go under the attack, which will allow you to get some quick hits in.

If there's too much distance between you and the Taurus Demon, it will use the Jumping Pound to close in rapidly. The demon will crouch down, and then it will jump towards you and deliver a long range vertical attack. As soon as you see the demon crouch, either run towards it and roll past the attack, or continue moving backwards to get out of range.

Another attack that the Demon will only use when you're close. Because it is one of the quickest attacks, it's the primary one you need to be wary of. The start of the attack is quite similar to the Standing Pound, but the follow up is much quicker. You can still move around to the back of the Demon during the start of the attack, but be ready to roll to the side in case you do not get around in time.

This close range version of the Pound is only used if you're very close to the Demon, and is also much easier to avoid. Wait until you see the Demon raise its hammer into the air slowly, and as it commences the attack. walk around to its back. From this position you will be safe to attack before it recovers. 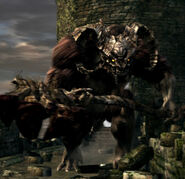 Rushing towards the player 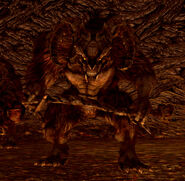 In the Demon Ruins 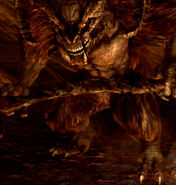 Retrieved from "https://darksouls.fandom.com/wiki/Taurus_Demon?oldid=329264"
Community content is available under CC-BY-SA unless otherwise noted.