My sixth sense warned me of danger, and I danced between flurries of blades, unscathed, but alas, my clothes went to tatters.[1]

The Sword Master appears as an aged undead wearing nothing but just a few rags and wielding a katana. He serves as a sort of tutorial for one-on-one fights in the game.

His decayed aspect and almost complete lack of garments may fool the player into thinking it would be an easy fight, but his resilience to damage at the point in the game when he can be first encountered and his superior combat techniques will prove him to be a worthy adversary.

He uses the Uchigatana's two-handed moveset and will often keep changing stances to prepare to use its skill, a powerful lunging slash. If attacked while in this stance, he will perform this weapon's secondary skill, a parry and riposte counterattack.

Once defeated, he can be summoned to aid in the following boss fights:

The Sword Master can be an unexpected powerful adversary the first time he is encountered. He has a long aggro range and will start approaching the player from a big distance, albeit slowly. His attacks are usually limited to no more than two or three slashes while holding his katana with both hands. However, he will be frequently changing his stance, preparing to unleash his weapon's skill by holding it at waist level in a sheathed-like manner. Refrain from attacking him at this moment or he will parry and follow with a riposte.

He is weak to most types of attack, so using elemental infusions or buffs will be helpful against him. He also has very little poise, so it's possible to stagger him with just a few of well-connected hits. His attacks are quite predictable too, which makes him very susceptible of being parried. It is not recommended to fight him very early in the game, though, as he will take minimal damage while being able to deal high amounts in return.

The battle initially takes place near a cliff, so it is possible to lure him into falling with enough practice. In addition, he cannot enter Firelink Shrine, so the player may also opt to lure him to the entrance and attack him from inside, preferably with a ranged weapon, though a long enough melee weapon, such as a spear or halberd, will also suffice. 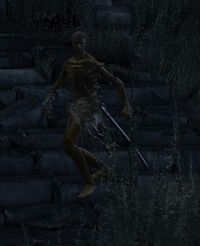 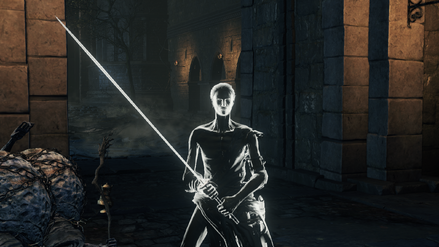 Summoned as a phantom.

Summon icon
Add a photo to this gallery

Retrieved from "https://darksouls.fandom.com/wiki/Sword_Master?oldid=330186"
Community content is available under CC-BY-SA unless otherwise noted.