Start a Wiki
watch 02:45
'Dark Souls' Lore: Stray Demon
Do you like this video?

The Stray Demon is an optional boss in Dark Souls, located in the Northern Undead Asylum. It can only be fought by players upon returning to the asylum, after they leave the facility for the first time.

The Stray Demon is found in the Northern Undead Asylum. When first exiting the prison cell at the beginning of the game, the Stray Demon can be seen wandering around its boss arena through the bars to the right. However, it is impossible to reach at this point in the game since players need to return to the asylum after leaving for the first time. Upon returning, the Stray Demon can be fought by falling through the floor in the middle of the main hall, where players originally fought the Asylum Demon.

The Stray Demon wields an unidentified catalyst, a casting tool used to channel Magic. The weapon is possibly a Demon's Catalyst. The demon itself is similar in appearance to the Asylum Demon and the Demon Firesage. It has an almost draconic appearance, with green scales all over its body and a pair of stubby wings on its back. It sports a tail and horn-like growths portrude from its legs and arms. Dark red eyes are accompanied by a set of large teeth that are revealed by the demon's permanently exposed gums.

The Stray Demon[1] was a demon who was most likely created when the Witch of Izalith attempted to duplicate the First Flame using a Lord Soul. The attempt was unsuccessful and accidentally created the Bed of Chaos, the mother and source of all demons.[2] After its creation, the Stray Demon came to reside in the Northern Undead Asylum.[1] The prison was designed to keep Undead locked away from the rest of the world and was notably difficult to escape from.[3]

When the Chosen Undead returned to the prison after they defeated the Asylum Demon, they encountered and defeated the Stray Demon in a room just below the main hall.[1]

The player will first fall through the floor, lose some health from the landing, and end up across the room in front of the Stray Demon. Casting Fall Control before the fight will negate the damage players suffer from falling into the Stray Demon's pit. There is no place to use the White Sign Soapstone in this area so it is not possible to summon others for this fight. The major difference from the Asylum Demon is that the Stray Demon wields a catalyst-type weapon that is capable of creating large Magic explosions in front of it, inflicting serious damage in a wide area.

The Stray Demon possesses two magic area-of-effect attacks, so learning the telegraphs for them is very important. When it prepares to wave its weapon horizontally, from left to right (player's right to left), it will create a large frontal magic explosion that can be very difficult to roll through. Its other area-of-effect attack is telegraphed by pointing its catalyst downward and planting it into the ground, which creates the self-centered explosion that can reach in an area behind it. The Crest Shield, dropped by Oscar of Astora, is highly useful in mitigating the magic damage.

Ideally, much of the fight should be spent attacking the demon from behind, as this leaves it unable to hit the player with its weapon swings. However, caution should be exercised as its downward-stabbing magical explosion can still hit players standing next to its tail. Players can avoid this by retreating a few meters behind it when they see it lift the catalyst up in preparation. In between his explosion attacks, players should pelt his backside with their attack of choice. The Stray Demon will occasionally jump into the air and perform a rear-drop to reorient itself to face the player. When this occurs, this can be avoided by walking about two meters away. Using a shield will deal heavy stamina damage. Sticking to his right may damage and knockdown the player due to the weapon facing in that direction.

The Stray Demon is susceptible to bleed damage and although it can be inflicted with both Toxic and Poison, it is immune to the damage of poison, though toxic will very slowly inflict damage. Like other demons, it also takes bonus damage from Black Knight weaponry. It is also not as susceptible to Black Firebombs as the Asylum Demon.

Two horizontal swings of the Demon's hammer. Similar to the Asylum Demon's attack. Can be blocked, but heavy stamina drain occurs. Can also be rolled under, allowing the player to attack the Demon.

An overhead hammer smash with exceptionally long reach. Can be avoided by dodging to the left or right.

Can only be used after the first Power Smash. The Stray Demon raises its hammer, then smashes it down again. Can be dodged by rolling to the left or right.

The Stray Demon flies up, pauses momentarily to rotate itself to face the player, then falls to the ground. Can be avoided by retreating away.

The Stray Demon brings the hammer to its left (player's right), then waves it horizontally, causing a massive explosion in front of it. Unlike the Hammer Drive attack, it doesn't have any backwards hitbox and can be dodged by getting behind, or even under, the demon. Despite the attacks name, it deals purely Magic damage.

The Stray Demon grips the hammer in both hands, pointing downward, and drives it into the ground in front of it. Similar to the Asylum Demon's attack, however, once the hammer hits the ground, a massive explosion occurs at the point of impact, which can deal damage in an area behind it. 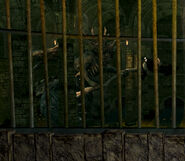 As seen at the beginning of the game.

Chosen Undead takes a defensive stance against the demon.

Size comparison between the Stray Demon and the Chosen Undead.

Retrieved from "https://darksouls.fandom.com/wiki/Stray_Demon?oldid=328411"
Community content is available under CC-BY-SA unless otherwise noted.