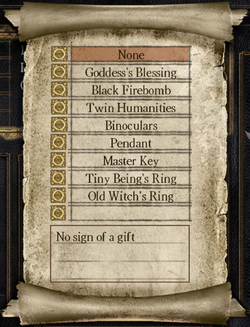 Starting Gifts are starting items in Dark Souls which the player must choose from during Character Creation.

Unless otherwise stated, the player receives just one unit of the gift.

Choose this option if no gift is desired.

Explodes upon impact when thrown. More deadly than std bomb.

Black Firebomb ×10. Throwable item that creates a powerful blaze, inflicting Fire Damage to those near the impact. They can be used to easily defeat the Asylum Demon when first encountered and therefore is a relatively easy way to obtain the Demon's Great Hammer on the first playthrough.

Twin Humanities. A consumable item that gives the player 2 units of liquid Humanity and fully replenishes their HP. The Humanity item can also be easily obtained from various locations, bosses, enemies and stolen in liquid form from most non-player characters.

Binoculars. Use to peer at faraway sights.

Binoculars. Used to see distant threats, scenery, and other objects. This item can also be found in the graveyard, next to Firelink Shrine.

Pendant. Can be used to trade with Snuggly the Crow for a Souvenir of Reprisal and is also obtainable if certain circumstances are met.

Master Key. Starting item for Thief class. Reusable key that unlocks numerous areas earlier than usual. These include the Valley of Drakes, various doors in Undead Burg and others.

Tiny Being's Ring. An accessory that gives the player a small boost in Health. Contrary to its description, it does not regenerate the wearer's HP and can also be obtained later on in the player's travels.

Gift from a witch. Ancient ring with no obvious effect.

Old Witch's Ring. Allows the Chosen Undead to understand the words of Quelaag's Sister. Can also be obtained later through an alternative method.

Retrieved from "https://darksouls.fandom.com/wiki/Starting_Gifts?oldid=330102"
Community content is available under CC-BY-SA unless otherwise noted.