View source
watch 02:02
What is Soul of Cinder?
Do you like this video?
Play Sound

Kiln of the First Flame

Soul of the Lords
The Soul of Cinder is the final boss of Dark Souls III.

The Soul of Cinder is the manifestation of all Lords of Cinder that have pledged to defend the First Flame by linking it.

Soul of Cinder appears to be a tall knight wearing badly worn and charred armor. Its weapon of choice is the Firelink Greatsword, a massive version of the Coiled Sword that can change its shape to suit its wielder's needs. It changes attack moves very smoothly, making it hard for players to counterattack it. The different fighting tactics make for a very memorable boss fight.

When the player first enters the arena, the Soul of Cinder will be sitting at the middle of the area, its sword planted before him in a semblance of a bonfire. After a moment, it pulls its sword out of the ground and engages the player.

Kiln of the First Flame

Soul of Cinder is an amalgamation of previous Lords of Cinder such as Lord Gwyn and the Chosen Undead (assuming they survive and manages to link the flame in their world), and every other character who has ever linked the First Flame. This is confirmed by its Japanese name, Incarnation of Kings (王たちの化身, lit. Outachi no Keshin), as well as the description from the Soul of the Lords.[1] As such, it wields the combined abilities, weapons, and magic of its components, giving him tremendous power.

The Soul of Cinder's role as the deific manifestation of the previous Lords of Cinder is to defend the flame; as such, it acts as the final line of defense against the Ashen One when they arrive at the resting place of the First Flame.

Soul of Cinder can use four different weapon stances, each utilizing different skills and attacks based on a magic type in the game (excluding hexes). 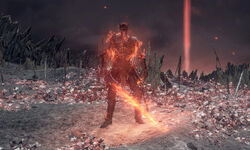 The Soul of Cinder's second phase begins once the first phase's health bar has been depleted. After restoring its health to full in a damaging explosion of fire, he will abandon its previous moveset (reverting his sword to its default form if necessary) in favor of a moveset very similar to Lord Gwyn's moveset from Dark Souls, with the exception of a few new attacks. The Soul of Cinder will increase in speed and damage at this point. One of its new attacks involves three unique uses of the Sunlight Spear miracle; the first being a standard Sunlight Spear hurled forward, and the second being a Sunlight Spear that is thrown upward into the air. After a brief period, a cloud will form in the sky, an audible thunderclap is heard and shower of homing Sunlight Spears will rain down upon the player from the cloud, dealing massive damage, similar to Splintering Lightning Spear from Dark Souls II. You can see the cloud if you run away from Soul of Cinder and look upward above it. The final attack is where the Soul of Cinder throws a Sunlight Spear into the ground, causing a small, ground-based area-of-effect of heavy lightning damage on impact, similarly to the Lightning Stake miracle.

Its sword attacks are identical to Gwyn's and can be dodged in a similar manner. However, the Soul of Cinder will have a new, fast combo that, if caught up in, will juggle the player in the air. The last attack of this combo is a stab into the ground that causes a large, fiery explosion that encompasses a very large area around him. The combo attacks have a fire projectile that will damage the player at range, so it is advised to roll through each attack carefully and keep away as the chain progresses further. It's one of the most powerful attacks in the series, almost completely depleting a player's health if caught and unblocked.

It is advised to finish the first phase quickly to conserve Estus for the second phase. This can be done by aiming to stagger the boss; by pressuring him and attacking constantly while avoiding its attacks, when it staggers there will be a brief window for a fully-charged strong attack. The boss won't stagger if the player gives it breathing room where its poise meter will fill up. However, beware that this strategy is difficult to pull off when the Soul of Cinder uses its Scimitar moveset, because he will start attacking in quick succession. Attacks with heavier weapons like Greataxes can stagger the boss within two to three repeated hits, in some cases with the weapon being wielded in one hand alone.

During the second phase, it is best to maintain distance from the boss and try to bait out its jump attack, which is easily avoidable and leaves it open for a hit or two. It is dangerous to keep close to the boss as it might lead to depleting stamina and/or getting caught in his grab or five-hit combo. If caught by the grab, the boss will receive an attack and defense boost for a short duration.

The Soul of Cinder is weak to sorceries and lightning damage and susceptible to Dark damage. However, it is slightly-resistant to fire attacks, so pyromancies or fire damage will be less effective, especially in the second phase.

Soul of Cinder during the opening cutscene.

Soul of Cinder charging at the player.

Artwork depicting the Soul of Cinder. 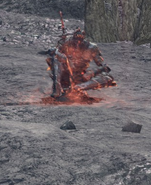 The Soul of Cinder resting at the bonfire.