Start a Wiki
watch 01:39
Who is Solair of Astora?
Do you like this video? 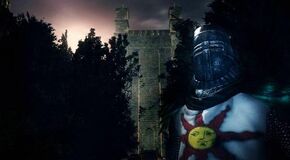 "You really are fond of chatting with me, aren't you? If I didn't know better, I'd think you had feelings for me! Oh, no, dear me. Pretend you didn't hear that! Hah hah hah!"
— Solaire of Astora

Solaire of Astora is a character in Dark Souls. He is voiced by Daniel Flynn, who also voiced Vamos and the Giant Blacksmith as well as Blue Sentinel Targray in Dark Souls II.

Solaire is first found just in front of the bridge that leads to Undead Parish, gazing at the sun. Speaking to him here will give the player the White Sign Soapstone and allow Solaire to be summoned to fight the Bell Gargoyles as a Gold Phantom.

Solaire may be summoned for the fight with the Gaping Dragon in the Depths.

Solaire can be met by a bonfire in Anor Londo and can be summoned for the encounter with Ornstein and Smough. Afterwards, Solaire will move from Anor Londo to the Sunlight Altar in Undead Parish, offering the player a chance to join the Warrior of Sunlight Covenant.

Solaire can be summoned for the Centipede Demon fight.

After defeating the Centipede Demon and continuing towards Lost Izalith from the boss arena, the player will encounter him again. If the player speaks to Solaire immediately after or enters Lost Izalith from this location, Solaire will later become hostile, attacking the player on their next meeting and will be unavailable as a phantom in the Kiln of the First Flame.

If the player instead takes the shortcut to Lost Izalith (which can only be accessed through being a +2 Chaos Servant), and destroys the glowing red-eyed Chaos Bug found there and kills the Centipede Demon, Solaire can be found sitting in the Chaos Bug room saddened that he could not find his own sun. In his lucid state, Solaire can later be summoned for the fight against Gwyn.

Solaire goes on to defeat Gwyn and link the Flame in his own world, if he survives Lost Izalith with the player's help.

Solaire is a Warrior of Sunlight who is determined to find "his very own sun".[1] His faith is upstanding and unwavering,[2] and all holy symbols on Solaire's belongings were painted by himself.[2][3] Solaire claims to be an adherent of the Lord of Sunlight.[1] His incredible prowess is attributed to training and high-quality equipment, and despite the holy symbols on his equipment, neither Solaire nor his possessions are blessed or enchanted.[4]

His attempts to find his sun led him through Anor Londo, Blighttown, the Tomb of the Giants and Lost Izalith.[1] When he goes to Lost Izalith, Solaire may become parasitised by a Sunlight Maggot, a creature known to emit a blinding light when worn on the head.[5] When he finds the maggot, Solaire goes insane, claiming the maggot was the sun he was searching for and attacks the Chosen Undead on sight.[1]

The nature of Solaire's "very own sun" remains unclear. During normal gameplay, Solaire will most likely find the Sunlight Maggot and lose his mind due to his desparation.[1] However, if the Chosen Undead prevents him from finding the maggot, Solaire can be summoned for the fight against Gwyn. Having reached the Kiln of the First Flame, it is possible that Solaire "finds his sun" by linking the fire.

Solaire's legacy is remembered in both Drangleic and Lothric. In Drangleic, the image of a "hero of yore" was painted onto the Sunlight Parma,[6] an item given to the Bearer of the Curse for offering Sunlight Medals to the Heirs of the Sun. Solaire's sword is also given to the bearer as a reward from the same covenant. At this point, it still exhibits no special properties beyond its high quality. In Lothric, Solaire is remembered as the Knight of Sunlight, and all of his belongings can be found by the Ashen One. Though most of them still lack special powers, his sword has been imbued with the power of the sun, and is said to be a relic of a "one-sided adoration."[7] His talisman also "fills the user with similar steadfastness" to Solaire's own, providing a stronger Unfaltering Prayer than other talismans.[8]

Attacking and killing Solaire will make him unavailable for future boss fights. Should the player wish to attack him, Solaire will fight with a sword and shield, and use the Lightning Spear miracle.

Solaire as he is summoned

Solaire without his helm

Amiibo figure of Solaire.
Add a photo to this gallery

Start a Discussion Discussions about Solaire of Astora