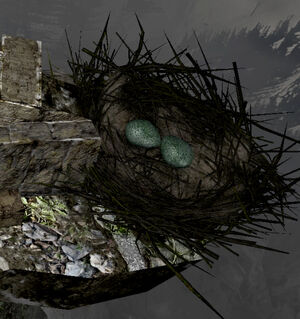 Snuggly the Crow is an invisible NPC in Dark Souls. She is similar to Sparkly the Crow in Demon's Souls, as she accepts particular items in exchange for other useful items.

Snuggly is located in the Northern Undead Asylum, on a small ridge to the right of the asylum itself, just before the cliff where the Chosen Undead is grabbed by the Giant Crow and where a larger nest appears after the player returns to the Asylum from Firelink Shrine.

Snuggly's nest is not the same in which the player is dropped by the Giant Crow. Instead, walking forward about twenty feet toward the asylum and turning left will bring the player to the correct trading location. Dropping an item in the wrong nest will result in its permanent loss.

In order to exchange items with Snuggly, one must drop an item in her nest and wait for her response. If she says "No, no... that no soft... that no warm," she won't accept it. If she does not respond, the item has either been placed outside her nest, or she will accept it. Successfully completing the trade can be done in many ways. The player can quit and reload the game, use Homeward Bone or Homeward Miracle, or fall off the ledge and return to the nest (remembering to first rest at the bonfire in the Asylum). The exchange item should be now in her nest. Note that each item trade can only be performed once per playthrough.

This is a table of all known trades: