Smough's Hammer is a great hammer in Dark Souls.

Great hammer from the soul of executioner Smough, who guards the cathedral in the forsaken city of Anor Londo. Smough loved his work, and ground the bones of his victims into his own feed, ruining his hopes of being ranked with the Four Knights.

Smough's Hammer is created by ascending any Standard +10 hammer or great hammer at the Giant Blacksmith in Anor Londo with the Soul of Smough and 5,000 souls.

Smough's Hammer has the dubious distinction of having the highest weight and strength requirement of any weapon in the game. It has extremely high base damage, but is still slightly weaker than comparatively lighter weapons such as the Great Club and Demon's Greataxe due to its low scaling. Smough's Hammer cannot be enchanted.

Smough's Hammer replenishes 10 HP to its wielder per hit. Similar traits are found in the Server and the Butcher Knife.

Smough's Hammer has a very slightly larger hitbox on the 2-handed rolling attacks when compared to other Great Hammers. While the increased range on this specific attack is quite minor, when paired with the fact that rolling attacks from Great Hammers cannot be parried, this can be quite useful in PVP, and can throw people off. 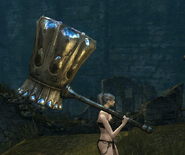 Retrieved from "https://darksouls.fandom.com/wiki/Smough%27s_Hammer?oldid=312377"
Community content is available under CC-BY-SA unless otherwise noted.