The Smelter Demon is an optional boss in Dark Souls II: Crown of the Old Iron King.

The Smelter Demon is found in the Iron Passage.

The Smelter Demon is similar to the Iron Golem in Dark Souls in that it is a construct made of iron that is given life through some means. Its body is made entirely of iron except for a portion of its chest, which is hollow and exposes a core of magical flame. It is mostly the same as the Smelter Demon from the Iron Keep, with some visual differences.

The same combat tactics used when fighting the Smelter Demon at Iron Keep can also be applied here for the most part; however, the player must be wary of some minor differences. First and foremost, it's highly recommended to wear the best possible Magic resistant wares available in your inventory, and also bring a shield that has a combination of both good physical and magical defenses. Equip the best Spell Quartz Ring at your disposal and apply any other means necessary to resist Magic damage. Also, make sure your selected weapons are not Magic or Lightning based, as he's highly resistant to those elements.

As soon as you cross the fog gate, lock-on and run toward the demon to score a couple of free hits. The battle will then progress in a similar way as that from Iron Keep's. Always roll in the direction of his back on his 1~3 combo (not to his side, lest you risk taking damage). The main difference here is that he'll actually often delay his second and/or third attacks, taunting you into rolling early, so the timing used in one of his combos may be very different from the next.

This Smelter Demon seems to be much more fierce than the one at Iron Keep, so manage your stamina wisely. Learn when to attack and when to recharge, and most importantly, don't get greedy, just attack him once or twice (depending on the speed of your weapon) per opportunity and retreat. Also, learn when it's the best moment to heal; this is very important, as this particular boss will automatically react when he detects you're healing and will run toward you to stab you with his sword.

Steel-willed Lorrie and Drifter Swordsman Aidel can be summoned for this battle. Their summon signs are right after the bonfire. 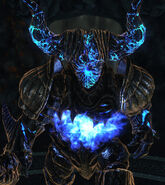