The Smelter Demon is an optional boss in Dark Souls II.

The Smelter Demon is found in the Iron Keep, in a circular room after crossing the drawbridge in the wide open lava area with several Alonne Knights.

The Smelter Demon is similar to the Iron Golem in Dark Souls in that the Demon is a construct made of iron that has been animated through some means. His body is made entirely of iron except for a portion of his chest, which is hollow and exposes a core of flames.

The Smelter Demon was responsible for the death of the Iron King, and the fall of his kingdom.[1]

If the player is using spells/miracles/hexes, they won't have to deal with the fire damage inflicted by staying close to the Smelter Demon. If the player uses offensive miracles, they might want to cast it one at a time because of the delayed casting time of the spell; if they attempt to cast another one, the Smelter Demon would probably connect a hit. Depending on the cast time delay of the spell the player uses, they can connect two hits (Great Heavy Soul Arrow) or one (Soul Vortex).

The player might want to avoid blocking the Smelter Demon's attacks if they don't have high fire resistance, especially when the boss infuses his weapon.

The player faces the Smelter Demon 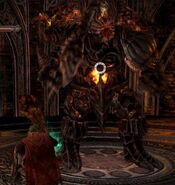 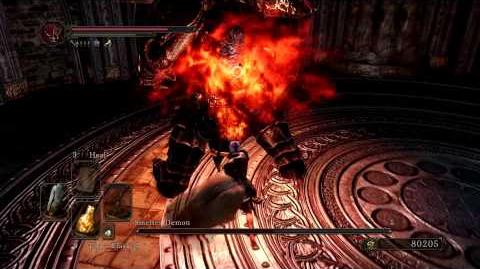 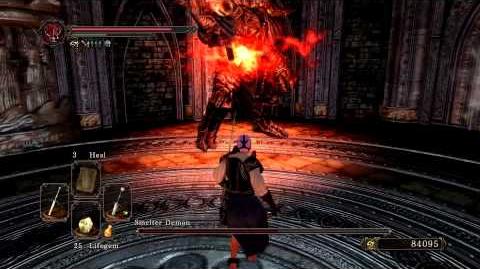 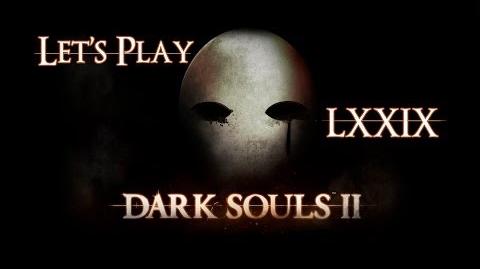 Let's play Dark souls II - 79 - Boss fight!!! Smelter Demon and how to fight him with magic