Tall skeletal warriors that wield a variety of weapons. Despite their name, not all the variants actually use swords in combat. There are four versions encountered:

The first three variants are equipped with the Carthus Milkring, which enables them to become invisible whilst rolling. The twin shotels warriors are much more acrobatic and can also throw kukris at the player.

All Skeleton Swordsmen are very agile opponents; however, they have little poise and are very easy to stagger and stunlock. They can also be lured into bottomless pits for easy kills, as they have difficulty adjusting their momentum when rolling. Their attacks do inflict Bleed and they can be deadly if they trap the player, so it is recommended to avoid fighting them in enclosed spaces.

Skeletons with white glowing eyes will reanimate once defeated after a few seconds. The player should pay attention to whether or not they drop souls or an item; if they don't, then they will reanimate and they must be defeated a second time. 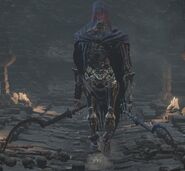 Twin shotel variant.
Add a photo to this gallery
Retrieved from "https://darksouls.fandom.com/wiki/Skeleton_Swordsman_(Dark_Souls_III)?oldid=317882"
Community content is available under CC-BY-SA unless otherwise noted.