Start a Wiki
watch 06:56
'Dark Souls II' - 10. Skeleton Lords perfect battle
Do you like this video?

The Skeleton Lords are a collective boss in Dark Souls II.

Located at the far end of the main path in Huntsman's Copse, near a waterfall.

During this battle, the player will not fight one but multiple foes at once. At the beginning of the fight, the player will have to face the three Skeleton Lords: one on the left, one in the middle and one on the right. The Lord on the left carries a Great Scythe, the Lord on the right wields the Roaring Halberd and the Lord in the middle carries a large and unique bone staff.

The Skeleton Lords were originally servants of the Old Iron King and were tasked with hunting and imprisoning the undead. However, they were eventually consumed by the very curse they were trying to contain and abandoned their duties, choosing to create their own kingdom out of the bones of their victims.

There are no characters that can be summoned for this fight in the original version of Dark Souls II.

Scholar of the First SinEdit

In Scholar of the First Sin, the player can summon up to two phantoms for this fight, Bashful Ray and Creighton the Wanderer.

Upon entering the room, the player will be in the presence of the three Skeleton Lords that reign over the Huntsman's Copse, each one sitting on a throne made of bones. The Lord on the left carries a scythe, the Lord on the right wields a halberd and the Lord in the middle comes armed with a large bone staff. While all three Lords are capable of casting pyromancies, the scythe- and halberd-wielding ones will focus more on chasing the player, trying to hit them with melee attacks. The one in the middle will usually stay near the center of the room and cast powerful pyromancies throughout the course of the battle. Upon getting into melee range with this Lord, however, he will also try to bash the player with his staff.

It's advisable not to kill more than one Lord at a time, since each time one of them dies, a large group of skeletons will emerge in his place. If the player defeats two or all three Lords before taking care of their respective minions, then they would end up having to deal with all groups of skeletons combined, making the fight needlessly difficult.

At the beginning of the fight, the three Lords will first have to stand up from their thrones and slowly levitate down until they reach the ground; this will provide enough time to attack one of them repeatedly, usually allowing to defeat him before he even gets a chance to retaliate. The player should focus in attacking either the Lord on the left or the one on the right at first.

Items or spells that can distract lesser enemies, such as Alluring Skulls or Yearn, are especially effective in this battle as they can be used to both distract and group large numbers of skeletons, allowing the player to attack them with impunity. Weapons that perform wide horizontal swings, such as those from greatswords and ultra greatswords, are recommended for this fight as they will allow the player to kill many skeletons at once. Also, since all skeleton-type enemies have an innate weakness to fire, bringing a weapon infused with this element or casting pyromancies will render this battle much easier.

The boss room also counts with four big columns the player can use for protection. Furthermore, the Lords' thrones themselves can be used for this purpose as well, although they will crumble after receiving a hit. 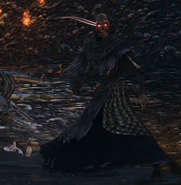 The Skeleton Lords sitting atop their thrones

The player fighting against the Skeleton Lords 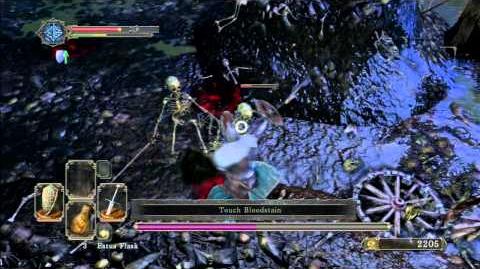 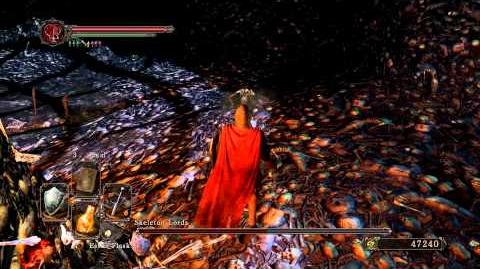 Retrieved from "https://darksouls.fandom.com/wiki/Skeleton_Lords?oldid=328826"
Community content is available under CC-BY-SA unless otherwise noted.