Skeletons are piles of bones that reanimate when disturbed. Despite their brittle appearance, they are fast and aggressive opponents that can easily overwhelm an unwary player. They wield of variety of weapons and are capable of fighting despite missing limbs and even their heads.

Some skeletons in the Undead Settlement appear much more decayed, with plantlife growing out from their bodies.

Skeletons often appear in packs and their aggressive fighting style can easily kill an unprepared player. They use a variety of sword attacks, including a leaping slice, dashing lunge, and a dive attack that briefly causes them to fall apart. All of their attacks cause Bleed build-up, and can also parry and riposte the player for heavy damage.

Most skeletons reanimate when the player is close to them; this process takes a few seconds, however, leaving them vulnerable whilst they assemble themselves. They make a distinct sound when reanimating, so the player should listen out for it when exploring skeleton-inhabited lairs to avoid being ambushed. They are very weak to fire and will flail helplessly if ignited.

Some of the skeletons in the Catacombs of Carthus have white glowing eyes and will reanimate a second time when defeated. The player should pay attention to see if they drop an item or souls; if they don't, then they will reanimate after a few seconds.

The player should not be overconfident when approaching a pile of bones, as they may randomly reassemble instantly and start attacking in quick succession.

Two non-hostile, hooded skeletons are found in the Catacombs of Carthus and will flee when approached. Each controls one of the big skeletal boulders that are rolling in their vicinity. Killing them will make the boulder to crash and break apart, revealing its contents. 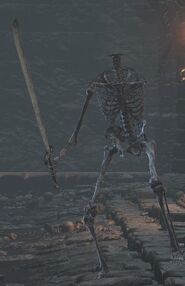 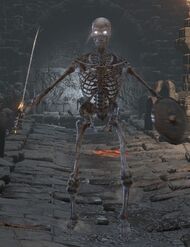 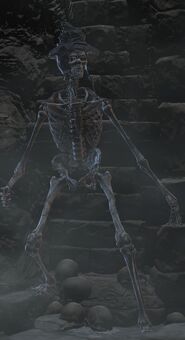