Sirris of the Sunless Realms

Sirris of the Sunless Realms

"If I can be of help, by all means, do call upon me.
Blessing of the moon upon your journey."
— Sirris

Sirris of the Sunless Realms is a character in Dark Souls III.

A member of the Blade of the Darkmoon, Sirris crosses paths with the player numerous times as she hunts down members of Rosaria's Fingers. Her true quest is to confront her grandfather, Hodrick, and end his madness.

In addition to being able to summon her, Sirris calls upon the player's assistance during her quest to help combat her opponents.

Sirris is first encountered at Firelink Shrine after igniting the Halfway Fortress bonfire; however, she won't interact with the player beyond some dialogue, and will leave afterward. Once the player delivers the Dreamchaser's Ashes to the Shrine Handmaid, Sirris will re-appear at Firelink Shrine and introduce herself, as well as teach the Darkmoon Loyalty gesture. She then leaves her sign to assist the player against the Deacons of the Deep and Abyss Watchers.

Upon reaching Irithyll of the Boreal Valley and lighting the Central Irithyll bonfire and then reloading the area, a summon sign will appear at the start of the bridge which allows the player to be summoned to Sirris's world to help her defeat Creighton the Wanderer. After Creighton is defeated, Sirris will return to Firelink and thank the player with a Blessed Mail Breaker and the Silvercat Ring.

Once the player defeats both the Curse-rotted Greatwood and Aldrich, Devourer of Gods, the Shrine Handmaid will sell a unique Budding Green Blossom, with a special message on it. This is a hint to the player to return to Undead Settlement and go to the arena where the Greatwood was fought. A summon sign can be found at the cusp of the pit, allowing the player to assist Sirris within the Pit of Hollows below. Here, she will confront Holy Knight Hodrick, her grandfather, and defeat him with the player's assistance. After the fight, the Sunset Shield will appear at an isolated grave just outside of Firelink Shrine, and the Sunset Set can be found within the Pit of Hollows.

After Hodrick is defeated, Sirris will appear at Firelink Shrine and ask to swear a vow of knighthood to the player. If accepted, she can be summoned for the Dragonslayer Armour and Twin Princes boss fights. Regardless of whether she was summoned for any of these battles, once both bosses are defeated her corpse can be found at the same grave where the Sunset Shield was found, holding the Sunless Talisman.

If her knighthood is refused, Sirris will remain at Firelink Shrine to give the player a chance to change their mind; however, once the player defeats any boss, she will leave. Once this happens, she can be found hollowed in the Pit of Hollows, praying to the Altar of Sacrifice. Approaching will cause her to immediately become hostile, and she can be killed for her talisman at this point.

Regardless of cause, the Shrine Handmaid will have the Sunless Set for sale after Sirris's death.

When given the opportunity, Sirris will cast Darkmoon Blade and Magic Barrier, increasing her damage output and granting her increased defense against Magic damage. She alternates between wielding her Estoc in one or both hands, however it does only moderate amounts of damage and is easily parried. When she is low on health, she will attempt to cast Heal rather than consume Estus, rendering her vulnerable to Backstabs. 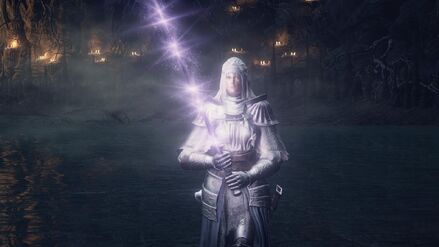