"Inside the cold painting, curiosity could be your cross. Stray from the withering flame, and the snow will swallow you whole."
— Sir Vilhelm

Sir Vilhelm is a character in Dark Souls III: Ashes of Ariandel. He was voiced by Steven Hartley.

Sir Vilhelm is initially found outside the chapel where Sister Friede is located. He will tell the Ashen One that, if they are lost, they may speak with Friede for guidance.

Vilhelm is encountered a second time, in the building that houses The Painter. He will be hostile to the player and must be defeated in order for the player to progress further.

A hollowed knight and hangman of Londor,[1] Vilhelm served Sister Friede both in Londor and in the Painted World, and seeks to prevent the burning of the painting.

His greatsword was a gift from Friede, and a symbol of Vilhelm's resignation from her service.[2] However, Vilhelm stayed in the Painted World despite accepting the blade. He was the one to bring Painter to the library's attic[3]. However, it is not stated if he enclosed her or were just guarding the key and Painter herself.

After the Ashen One is told by Friede to leave, he says the same, warning the player of the increasing danger the further through the painting they dare traverse. When encountered in the building housing The Painter, he will deride the inquisitiveness of the Ashen One, saying that they lack the stomach to face the danger they will put themselves in. He attempts to kill the Ashen One but he is vanquished in the process saying his goodbye to his lady.

Sir Vilhelm is a resourceful and powerful combatant with an aggressive fighting style.

At his disposal he has in his right hand an extremely powerful greatsword, the Onyx Blade, a weapon that is extremely high damaging and has one of the largest ranges of all in its class, as well as many thrust attacks that can deal extra damage should players be caught mid attack.

In his left hand, he will use mostly the Dark Hand to block attacks occasionally, and often attempting to siphon health from players who get too close. This can be used to one's advantage especially if wielding weapons that deal plenty of stamina damage, as guard breaking him is extremely easy.

However, should players hold a casting tool (Pyromancy Flame/Sacred Chime/Talisman/Staff) on their hands at any time, Vilhelm will almost immediately swap his Dark Hand for the Talisman, and will cast Vow of Silence in combination with Unfaltering Prayer to negate any spells the player has. He will repeat this many times over as the fight progresses; as soon as the spell runs out he will recast it.

Like Holy Knight Hodrick, it can be clear to see when he is about to cast a spell, he will switch to the Talisman and begin running in the opposite direction of the player. If he has above half health, then he will cast Vow of Silence, so waiting for him to cast it can be a good idea for a backstab. However, if he is below half health, then the player should keep an aggressive behavior and follow him, keep close to him and backstab him immediately so he will not heal. 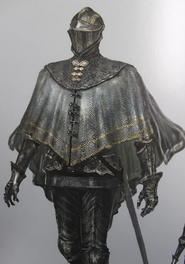 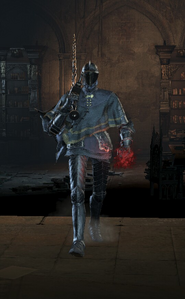 Retrieved from "https://darksouls.fandom.com/wiki/Sir_Vilhelm?oldid=319049"
Community content is available under CC-BY-SA unless otherwise noted.