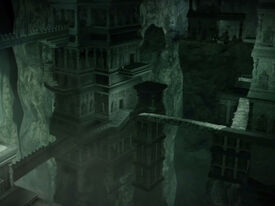 Shulva, Sanctum City is a location in Dark Souls II: Crown of the Sunken King.

Shulva is a vast, underground city featuring stepped pyramids and long, mechanically-manipulated bridges. There are also a number of elevators, sliding walls and rotating doors suggesting that, perhaps, the former citizens were well-educated and inventive. They were also suspicious of sorcery and preferred to put their trust in faith and miracles. Within the city is the Dragon's Sanctum where a cult of priestesses and their guardian knights worshiped the tortured dragon Sinh under the guidance of Elana, the Squalid Queen.

Shulva was a city built around a slumbering dragon that was worshipped as a deity. It was governed by the Sunken King and Elana. The dragon slept in the interior of the sanctum where priestess would attempt to soothe it with calming melodies. Eventually the city of Shulva was attacked by Sir Yorgh and the Drakeblood Knights, who sought the blood of the dragon in order to obtain a true understanding of life. The guardians of the city were overmatched and the Sunken King was defeated. Sir Yorgh entered the sanctum and tried to kill the dragon with his spear but instead awoke it from its sleep. As it woke up it spewed a toxic fog that quickly killed Sir Yorgh and filled the entire city rendering it uninhabitable. Elana, filled with rage after the defeat of the king, took on her true form and now collects souls while continuing to protect the city and the dragon.

Retrieved from "https://darksouls.fandom.com/wiki/Shulva,_Sanctum_City?oldid=327729"
Community content is available under CC-BY-SA unless otherwise noted.