Shiva of the East 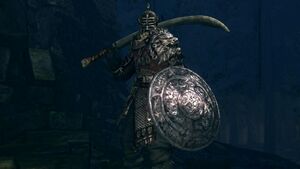 "Hunters with patience score the best kills."
— Shiva of the East

Shiva of the East is a character in Dark Souls. He is voiced by Kwei Lin Hsu.

Shiva is a member of the Forest Hunter covenant, and will not be present unless the player is among their ranks. He greets members cordially in the Darkroot Garden, but offers nothing there other than dialogue. Travel to Blighttown, though, and he will sell a variety of exotic weaponry.

Both Alvina and Patches express their mistrust towards Shiva, but he will be amicable and friendly with the player unless provoked. This mistrust is a remnant of cut content which involves Shiva killing the player to obtain their Chaos Blade (a reference to Satsuki from Demon's Souls). Shiva would then flee to the Painted World where the player could invade via a Black Eye Orb and regain the Chaos Blade. (This is evident from cut dialogues from the game)

Not much is known of Shiva, other than that he likes collecting things and is from an Eastern Land.[1] According to the cut content, he may have come to Lordran in search of the Chaos Blade.

The chief danger of fighting Shiva is the fact that he always has his bodyguard close to him. Thanks to Patch 1.05, the bodyguard can now be targeted, but fighting the two remains a tricky proposition. After moving to his Blighttown location, Shiva can be led into the swamps and poisoned, allowing for a slow but easy kill. The player can also escape up the nearby elevator after poisoning the duo, where they will be unable to follow, and allow the poison to run its course without any danger.

Shiva himself wields the Iron Round Shield and Murakumo, which deals decent damage and should not be underestimated; greeting the pair with a powerful area of effect attack such as Fire Tempest is a good idea.

Sometimes, when the Forest Hunter Archer is killed or players join another covenant, if players talk to Alvina she will disappear in a mass of white. Occasionally, as soon as she has done this, Shiva's bodyguard, a Forest Hunter Thief and the Forest Hunter Bandit will try to overrun the player in an attempt to kill them for their betrayal. In the case that this happens, Shiva will be alone later on if the player is victorious. 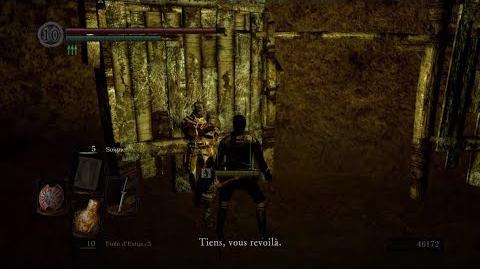 The following is content that is present within the code of Dark Souls, but not actually implemented in the game. Text was found from a text dump which can be found at: http://pastebin.com/hA42TwK8.