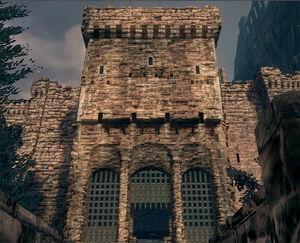 "Sen's Fortress is an old proving grounds built by the ancient gods. It is the only route leading to great Anor Londo. Of course, most fools can't even find their way into that fortified deathtrap..."
— Andre of Astora

Sen's Fortress is a location in Dark Souls.

Sen's Fortress is a large, stone fort inhabited by an assortment of enemies, including Serpents, undead knights and Titanite Demons. It is notable for its many traps and environmental hazards that line the hallways, and is said to be an old proving grounds built by the ancient gods. It is the only route that leads directly to great Anor Londo.

It can be found by crossing the stone bridge leading out of the enclosure in the Undead Parish out of a doorway in front of the bonfire before where Andre of Astora is working. The fort can only be entered after ringing both of the Bells of Awakening.

The only bonfire in the area is near the top of the fortress. In the area where the Giant throws firebombs down toward the player, it is reached by dropping off of the edge of the second platform where a piece of the wall is broken.

Another way to explain where it is as soon as you see the first giant across from you at the top and after going up the first flight of stone steps, you should see a break in the wall on your right near the corner. Drop down to it and you'll be at the bonfire.