Located in the Shaded Woods, Scorpioness Najka guards the path leading to the Doors of Pharros. When the player enters the boss room, only her torso is visible until after she is approached or hit. She will then burst out of the sand to reveal the rest of her scorpion body.

Najka and her betrothed, Manscorpion Tark, were created long ago by an unnamed master who has long since disappeared. It is implied that the two were experiments, similar to The Duke's Dear Freja, and that their creator was either Duke Tseldora or Seath the Scaleless himself. Najka and Tark are the only two of their kind that speak the human tongue, though a ring is required to understand them.

The two were once a peaceful couple living a quiet existence in the Shaded Ruins. But as time passed, Najka slowly began losing her mind and became more and more violent and unreasonable as a result. A war began between Tark and Najka, and has been waged for many years before the player's arrival.

The player is able to summon Manscorpion Tark if the player has used the Ring of Whispers to speak with him and exhaust his dialogue. His sign is on the ground directly outside her fog gate.

In Scholar of the First Sin, the summon sign for Bradley of the Old Guard is available beneath the arch at the bottom of the path leading up to the boss arena.

Scorpioness Najka uses both physical and magic damage. At the start of the fight she will blast a bolt of magic upon entering the room, afterwards she will emerge from the ground, revealing her full scorpion body. She is able to use a sort of Homing Soul Arrow and Homing Soulmass. She normally engages her magic attacks when the player has retained some distance from her for an amount of time. As for physical attacks, she will strike the player with her pincers resulting in a two-hit combo, or strike with her staff, which normally comes in the form of a thrust followed by a swipe. She will also try to stab the player with her stingers, one where she launches both of them into the ground at once (if the player evades this attack she will take some time to recover, though damage done during her recovery stage is reduced), another where she launches one stinger into the ground at a time. Her stinger attacks result in two things: one that pins the player to the ground and another that picks the player up and infects them with Toxic. After a certain amount of time, she will burrow into the ground and move around in an attempt to get underneath the player and knock them off their feet as she jumps out. If the player lingers behind her for too long she will slam her tails down dealing large amounts of damage.

What the player wants to do is stick to her side and get damage in as she is recovering from an attack. Players may also attack from the front, but will require a high stability shield and the ability to dodge quickly. Her Homing Soul Arrow can be easily dodged, the Homing Soulmass being more difficult. The best time to aim for damage is while she is casting her Homing Soulmass. She takes a little bit of time to cast and a little bit more time after that for them to fire. Players can dodge the Homing Soulmass by moving in one direction around her. Both spells can be dodged by getting some distance away from the Scorpioness and then sprinting to the left or right. The Arrows are dodged easily, as she does not close the distance before launching them. The Soulmass can be dodged the same way, provided that players can keep a half-dozen or so meters from her, as they are rather fast. Another alternative is to hide behind any of the dead tree logs scattered throughout the arena.

After a certain amount of time, Scorpioness Najka will dive underground and move around the room. Players can spot where she is by the little puffs of sand that trail the ground. If she is traveling under the player or close to the player, they will be slowed. The player should wait for the moment to dodge her as she jumps out. Alternatively, there are two chunks of ruined stone resembling a sort of platform in the sand. The player can stand on this to avoid the attack entirely, as she cannot surface through it. Remaining on the stone for a while will tire the Scorpioness and cause her to emerge from the sand, providing ample time to land a hit or two. If using the stones to avoid her jumping out from the ground, she will come up through the sand at exactly the same spot for that stone every time, allowing players to orient themselves properly to land heavy hits. A corpse holding an item (Flame Butterfly) can be spotted hanging on top of a dead tree on the left side of the arena. To obtain it, the player may risk luring Najka jumping out of the sand on that spot to destroy the log and get the item.

Her stingers may be cut off if the player so desires. The best method is to conserve a medium distance between Najka and the player to bait her into performing her Toxic-inducing stings into the ground and attack them until they fall off.

Manscorpion Tark will occupy most of her time until he is dead if summoned, which can be used as an advantage.

Pincers: Will strike the player using her pincers, one at a time.

Staff Strike: Thrusts her staff at the player and follows it up with a swipe.

Stingers: Launches one stinger at a time into the ground, hitting different points on the ground. A different variation is when she launches both of them into the ground at once; if evaded, any attacks done while she is cooling down will be reduced.

Burrow: During the fight she will burrows into the ground and attempt to strike the player from underground. Her movements can be traced by the smalls patches of dust clouds that appear. This move can be used to knock the item that is in the room, hanging off a tree branch. Can be evaded by staying on the wooden planks found in the arena.

Homing Crystal Soulmass: When the player has some distance between her, she will activate five bolts of Homing Soulmass to hover above her and when the player gets close she will launch three of them at once, then fire the other 2 afterwards if the player is still within her range.

Soul Spear: This attack is executed while she is half burrowed, which only happens at the start of the fight. Upon the player entering the boss room, she will fire a Soul Spear at the player, has slight homing capabilities.

Stinger Swipe: While the player lingers around the side of her double stingers she will swipe them in the direction of the player. To safely dodge this move, move to her front and the attack will completely miss.

Stinger Slam: If the player is behind her for a while she will slam both stingers into the ground at once. 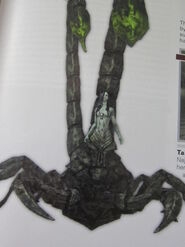 Render of Najka from the official guide 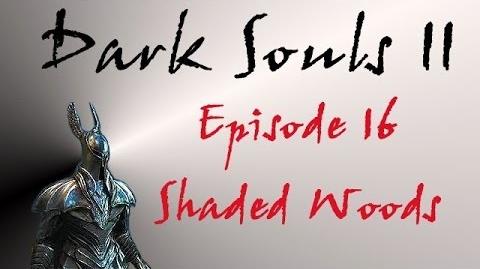 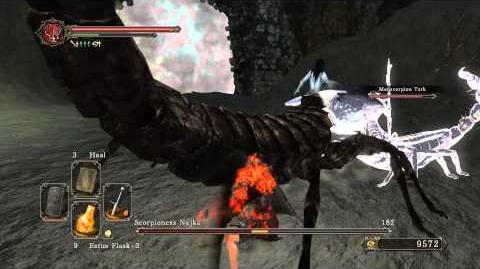 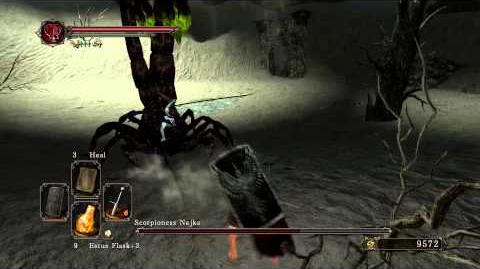