Guardian Soul
Guardian Tail - Sever tail
Sanctuary Guardian is a boss and later a respawning enemy in Dark Souls. It is exclusive to the Artorias of the Abyss DLC.

In the semi-flooded, enclosed opening in the Sanctuary Garden, guarding the entrance to the Oolacile Sanctuary.

Being a hybrid of different creatures, the Sanctuary Guardian possesses various abilities. Its body is part lion, part goat, and has a long, spiked scorpion tail, in addition to two sets of wings.

Its red-eyed lion half has white fur and large paws, which it uses to strike its opponent. Its goat legs have a dark purple color and can perform powerful kicks, and it uses its large set of curved horns to ram its opponent. Its four large wings give it the ability to fly for short periods of time and to release powerful blasts of wind, and its scorpion tail has poisonous properties. In addition to these deadly abilities, the beast can spew lightning projectiles from its mouth.

The Sanctuary Guardian has a high lightning and magic resistance, as well as a medium fire resistance, but is weaker to physical attacks.

The fight is primarily made up of fast physical combos, lightning projectiles thrown in as environmental hazards, and poisonous attacks. Most attacks can be dodged by rolling, but large stamina depletion will occur if blocking is preferred. The Sanctuary Guardian can easily stunlock and kill low Poise players with its four hit combos. Low Stamina or over-encumbered players may have a tough time enduring hit after hit.

This boss can be bled, but up to four successive hits must land.

It can be tricky to sever its tail, as only two of its attacks bring its tail within easy reach (Head Charge and Swoop).

Should players decide to equip a shield to fight the Sanctuary Guardian, the Eagle Shield is particularly well suited for this battle: it combines 95% physical protection (100% before patch 1.06) and 75% lightning protection, with great stability, all for a moderate weight and low Strength requirement.

It is ill-advised to take on this battle with slow roll: Indeed, the slow roll will not take the player far enough to dodge the "Wave of Water" attack, which otherwise leaves it wide open for a counterattack. If the player cannot dodge then it is better to stagger for a short time than to block this attack as blocking drains large amounts of stamina and will leave the player vulnerable to the Sanctuary Guardian's follow-up charge attack, while absorbing the blow will not damage the player and leaves time to block or roll afterwards.

To cut off a tail it's necessary to deal a certain amount of damage against it. The HP of the tail increases with higher NG cycles and is based on the HP of the respective enemy. Its tail has 500 health on NG and 785 on NG+.

Attacks rapidly in combos of 2 or 4 with its paws and horns. Two sequential paw or horn attacks is a 2 string attack. A paw attack followed by a horn attack, or vice versa, is a 4 string attack.

After rearing on its hind legs, it will proceed to slam its front paws down at the player.

Performs a quick charge and then thrusts its head upwards, launching the player into the air if it connects. Its tail will be lowered to the ground for a short time after this attack, providing an opportunity for the player to cut it.

Gallops into the air and the swoops down to attack with its horns. Its tail will be lowered to the ground for a short time after this attack, providing an opportunity for the player to cut it.

The Sanctuary Guardian will fly up into the air and pause before launching straight at the player with lightning speed. If avoided it will be vulnerable to attack for a short time, however if the attack hits it will instead somersault backwards through the air landing far away from the player.

Its wings are used to project a wave of water and wind in front of it. If blocked it will consume a huge amount of stamina, or outright break the block of shields without very high stability. If the player can not roll out of the way it is better to take the hit rather than attempt to block.

Will occasionally follow up with a Charge attack if player stays in front of it.

Lowers its head to charge, then releases a large ball of lightning at the target. Has an identical telegraph to Lightning Repeater.

Fires four lightning projectiles in moderately quick succession. Can be avoided by strafing to either side. Has an identical telegraph to Lightning Shot.

Strafes around the target whilst flying, firing a heavy lightning projectile.

Flies over the target, releasing a heavy lightning ball at the end of its flight. Can be effectively dodged by rolling backwards after the guardian has passed over the player.

It will spin slightly above ground in 360 degrees, sweeping with its tail, causing heavy poison buildup.

The Sanctuary Guardian will kick with its hind legs if the player is too close to its rear.

The Guardian will fly backwards far away from the player, causing them to lose target lock. 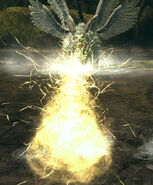 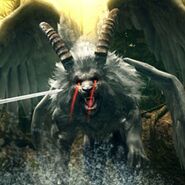 Head on combat with the Chosen Undead

The Guardian comes face to face with an intruder within the garden.