The Ruin Sentinels are a trio of bosses in Dark Souls II. They are also encountered later as respawning enemies in Drangleic Castle.

The Ruin Sentinels can be found in The Lost Bastille past a large group of Royal Swordsmen. The boss fight is a three on one, and players must achieve victory through dividing and conquering, separating the individual Sentinels and defeating them one by one.

The summon sign of Pilgrim Bellclaire, an NPC white phantom, can be found in a cell in the hallway before the fog gate. In Scholar of the First Sin, a Shade summon in the form of Felicia the Brave can be found near a wall switch in the room prior to the jail cell hallway.

A total of five Ruin Sentinels appear as respawning enemies in Drangleic Castle. They are found behind several doors found past the King's Gate bonfire, with a high number of Stone Soldiers guarding the room. The doors require the release of nearby souls to open, so killing a Stone Soldier within their proximity will open the doors, forfeiting the souls in the process.

Creations of the jailer, the Ruin Sentinels are formless souls that haunt distinct suits of armor.[1][2] They seem to guard The Lost Bastille and Drangleic Castle which, combined with their nature as souls controlling a suit of armor, makes them similar to the Ironclad Soldiers that assumed positions in Drangleic's royal army.

Their design is based on the armor of a company of knights who were sent by an Old King to retrieve the Dark Soul from the Ringed City. However they were soundly defeated and a dark fable was written about their fate. The original company ended up serving the judicators of the Ringed City.[2]

The Ruin Sentinels have hard-hitting attacks, however they can all be blocked with a good shield or dodged through rolling. As well, their attacks are easily telegraphed and most have long recovery times that allow players to inflict damage on them while they are immobilized. Care must be taken when fighting more than one at a time, as they can chain consecutive attacks together that can break a player's guard and leave them vulnerable to combos. Place priority in evading attacks and looking for opportunities to strike during their attack recovery, rather than going on the offensive.

When entering the boss room, players are initially faced with only Ruin Sentinel Yahim on an elevated platform above the rest of the arena; Alessia will be on the ground level on the opposite side of the room, while Ricce on another elevated platform. If the player does not leave the initial platform, Alessia and Ricce will not attempt to assist Yahim, making the fight considerably easier. Once Yahim is defeated, Alessia and Ricce will join the fight, both approaching to attack the player.

Bear in mind, the Ruin Sentinels are able to jump up to the starting platform from the ground below, performing a smashing or sweeping attack as they do so. Should Yahim fall off the platform mid-fight he will attempt to jump back on, while Alessia and Ricce can both jump up to the platform to engage the player once aggroed. When jumping off the platform, beware that fall damage will be incurred, so try to fall off when there is enough time and space to prevent a Sentinel from immediately attacking. As well, attempting to roll immediately following the fall can help in creating more distance, giving players time to use a healing item prior to re-engaging. If positioning makes it possible, a plunging attack on one of the Sentinels can inflict considerable damage.

When fighting Alessia and Ricce, try to separate them out or keep one behind the other, and attacking only when one is outside of attack range and the other is recovering after their own attack. Keep both within visual range at all times, and try to goad attacks from one or both in order to create windows of opportunity where both are recovering from attacks and counter-strikes can be made. The best way to achieve victory is to focus damage entirely on one of the Sentinels, as quickly removing one of them from the field will allow players to freely move around the arena and concentrate only on a single foe without worry of being hit from the side or behind by another one.

Keeping them both in view and managing their attack openings makes it easier to hit them between their slow attacks. All of their attacks deal physical damage, so a 100% physical blocking shield can be useful. Pilgrim Bellclaire is especially helpful with this fight, as she can inflict strong magical damage against them with her spells, provided that the player keeps the Sentinels' attention and allow her to cast uninterrupted.

Ruin Sentinels are very weak to both Strike and Lightning damage, so a good great hammer infused with Lightning will deal massive amounts of damage, capable of defeating each Sentinel in only three to four hits. It's also recommended to wear the Silvercat Ring before entering the fog gate, as it allows players to quickly jump down into the larger arena for more combat space without incurring fall damage.

In Drangleic Castle, the five Ruin Sentinels are far easier to deal with, as the Stone Soldiers can be dealt with at leisure, and the enclosed nature of their rooms allow players to aggro them one at a time. They will aggro only as far as the first part of the hallway into the room, giving players a guaranteed safe zone to retreat and heal. However, bear in mind that the inanimate Stone Soldiers can act as obstacles against movement, and that getting within the line of sight of any of the other Sentinels will immediately aggro them, so tread carefully.

The Ruin Sentinels can be parried, but not riposted nor backstabbed.

Note: All attacks from all three Sentinels are the same.

A render of a Ruin Sentinel 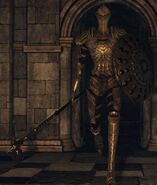