These warriors formerly served in Vendrick's army during the war against the Giant, however very few survived the battles and the remainder succumbed to the undead curse. Despite turning hollow, they continue to defend their King's domain.

Royal Swordsmen are encountered in The Lost Bastille and Drangleic Castle. In Scholar of the First Sin edition they can be encountered in the Forest of Fallen Giants, just before the Pursuer's boss arena. They are often found in teams of around 3-4 soldiers and they will work together to overwhelm the player. They wield greatswords and crossbows.

Though both of them look alike, the Castle variant are more aggressive and can do more damage. Standing their ground when using the crossbow and switching weapons only when the player approaches within a few units of distance.

Royal Swordsmen are weak individually but they work in teams and can easily overwhelm the player if they trap them in a corner. Greatsword-wielding soldiers will attempt to rush the player while their comrades armed with crossbows will open fire from a distance.

These enemies have low poise and are easily staggered. It is advisable to use ranged attacks to thin their numbers when they assault the player in a group. It is also worth noting that they are particularly weak to strike damage. 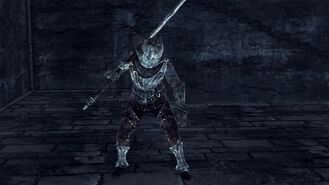 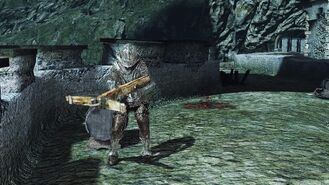 Add a photo to this gallery
Retrieved from "https://darksouls.fandom.com/wiki/Royal_Swordsman?oldid=322533"
Community content is available under CC-BY-SA unless otherwise noted.