The Ringed Knights, by command of the gods, stood amongst the ranks who set out to slay the dragons, but their contributions were never lauded.[1]

Powerful warriors that guard the Ringed City from intruders, Ringed Knights are followers of the dark and their weapons and equipment were forged in the Abyss itself. Despite their proximity to the dark and resemblance to the servants of Darkstalker Kaathe, they have not been corrupted and continue to serve the Gods.

They are capable of igniting their weapons, greatly increasing their offensive capabilities.

Only encountered in The Ringed City:

The Ringed Knights date back to the war against the dragons where they fought alongside Gwyn, Lord of Cinder. However their efforts were not recognized or commemorated.

Due to their close proximity to the dark and their equipment, the Gods branded them with a seal of fire; regardless, the knights continued to serve loyally.

All Ringed Knights have the same traits, high Fire resistance, weak to Frost, large health, can be bled, and they are extremely powerful and aggressive with skills that deal extra Fire damage and grant them poise. Under no circumstances should they be fought two at a time.

There are three variants:

Among the other Ringed Knights, they are the second hardest of them all. Their regular attacks usually are combos of two or three attacks often ending with a thrust, but sometimes followed by an upward attack. Spam-roll for best effect. When using their weapon's skill, staying close to them is nearly suicidal, as they deal tremendous damage and four-combo attacks that are hard to dodge, and a final delayed attack that deals even more damage. Instead, try to stay as far from them as possible and then start getting closer. This triggers their thrust attack, which is very easy to dodge by rolling into it and then backstabbing them for free easy damage.

Their shield is mostly for attacking and tricking the player. If they block and the player has enough stamina, keep attacking as two strikes often break their guards for a free riposte.

However, there is really only one attack that players need to be careful with, which is when they run toward them while using the fire breath. This serves only to mask their intent of a thrust attack as it is hard to see behind the fire. However, if the player times it well, they may roll into the attack and be rewarded with an easy backstab on the knight.

By far the most dangerous Ringed Knight, he has great range, damage potential, and extreme defense capacities. His spear has many combos with delayed horizontal attacks that make it hard to dodge anywhere since his range is so wide, therefore roll into the direction of where the attack is coming from in order to more effectively dodge it.

His weapon's skill is extremely dangerous and just makes everything about this knight even worse. Upon using it, the spear ignites (this grants it extra damage and range) and the knight lunges into the air toward the player with a thrust attack. Immediately after, he will use a very delayed and high damaging slice, occasionally followed by another thrust that also shoots fire into the ground in a narrow, yet long range toward the direction he faces. When he uses his skill, players should try to backstab after his second or third combo, as it leaves him wide open with his guard down; if successful, players can then deliver some more free damage as he gets up.

While the straight sword-wielding Ringed Knight can be easily guard broken and players with larger weapons can trade with them, that all becomes much harder and even dangerous to attempt due to the spear-wielding Ringed Knight's greatshield. Not only can it take many hits before guard broken, his greatshield's skill unleashes a violent shockwave that damages and throws players off their feet while granting Perseverance to the knight. This makes it impossible to trade with his attacks and gives him a boost to his defense. Either use a heavy weapon or a Stance heavy attack to break his guard. If players do not have this sort of weaponry, then playing passively and the aforementioned backstab strategy is their best bet.

While he is the Ringed Knight with the highest damage potential, his slow, easy to dodge and poorly delayed attacks make him the easiest of the knights to actually kill. He does have poise, so it becomes harder to stagger mid attacks and the player should be careful with the startup of his weapon's skill since it throws a fire shockwave similar to Moonlight Greatsword on a fully charged attack; therefore, rolling toward the attack and off to the side, rather the away from the attack itself, is the recommended course of action. However, they may follow up with either a powerful thrust or with a flip attack that causes a large, high damaging explosion, beware the latter.

In rare occasions, he may perform the skill, then the thrust attack, followed up by the flip; this will likely kill any player if all hits land. Besides that, he is the easiest of the Ringed Knight to backstab. Beware as more than two attacks will cause him to attack immediately with boosted poise; do not spam your attacks more than twice, as by then, not even great hammers can stagger him. Playing passively is encouraged. 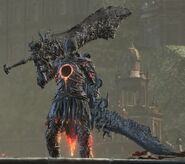 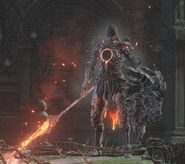 Spear variant
Add a photo to this gallery

Retrieved from "https://darksouls.fandom.com/wiki/Ringed_Knight?oldid=330208"
Community content is available under CC-BY-SA unless otherwise noted.