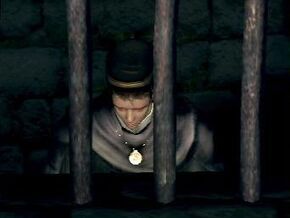 "Hm? What is it? Have you... Oh, no, don't worry. I've no intention of escape. It's safe here. I can't bear the thought of going Hollow out there. Although, I must admit, I've not much to occupy myself. How about this? I could forge your weapons, albeit with rather minimal tools. I will show you what made me the best in Vinheim!"
— Rickert of Vinheim

Rickert of Vinheim is a character in Dark Souls. He is a blacksmith by trade. He is voiced by Adam Sopp, who also voiced Vince of Thorolund, as well as the male Anri of Astora in Dark Souls III.

He is found stuck behind bars by the end of a staircase at the beginning of New Londo Ruins.

Rickert is the first blacksmith players can access, although he can be hard to find if he isn't specifically sought after. Rickert is also a blacksmith who can repair damaged weapons and armor, and ascend weapons down the Magic path (up to +5) by default. He can give players early access to spells and spell tools, but both Big Hat Logan and Griggs offer better prices and better spells. During the later phases of the game, Rickert is most valuable for his unique upgrade paths, Magic and Enchanted, which become accessible after finding the Large Magic Ember and the Enchanted Ember respectively.

Rickert was exiled from Vinheim, presumably because of his undeath. Not much is known about him except that he considers Big Hat Logan to be a legend dating back to "a hundred years ago". This implies that either Logan has been brought to present-day from the past through a portal similar to the one in Darkroot Basin (Artorias of the Abyss DLC only) or that it was due to the time warping characteristics of Lordran. A much simpler explanation would be that since Big Hat Logan is also undead, he simply could have died a hundred years ago and has kept his sanity since.

The only way to hurt Rickert is through the use of a long weapon, such as the Titanite Catch Pole or Demon's Spear. While Rickert does not fight back, it is easy to fall off the ledge accidentally. As Rickert can also be hurt by Wrath of the Gods using it is safer since it does not require movement.

Retrieved from "https://darksouls.fandom.com/wiki/Rickert_of_Vinheim?oldid=331234"
Community content is available under CC-BY-SA unless otherwise noted.