Easier to be detected by enemies

The Redeye Ring is a ring in Dark Souls II.

A cursed ring depicting a demon eye. Becomes easier to be detected by enemies.

If it is tranquility that you seek, then you should never have left your home.
If you seek strife, then fair enough, but no need to overdo it.

Sold by Sweet Shalquoir for 6,700 souls.

An excellent ring for white phantom tanks, the Redeye Ring makes enemies more likely to attack the wearer instead of other players. This makes the ring useful for players who are willing to take enemy aggro while other players deal damage to them.

It can also be equipped to allow others to heal during difficult battles without fear of being attacked. 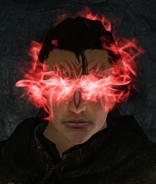 Visual effect of the ring
Add a photo to this gallery
Retrieved from "https://darksouls.fandom.com/wiki/Redeye_Ring?oldid=319475"
Community content is available under CC-BY-SA unless otherwise noted.