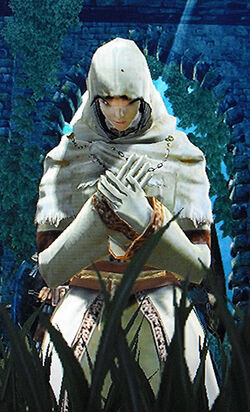 "You are Undead, as well? Then we've no time to fraternize. I have my mission, and you no doubt have yours. We must not let this curse overcome us."
— Reah of Thorolund

Reah of Thorolund is a character and merchant who appears in Dark Souls. She is voiced by Charlie Cameron, who also voiced Quelaag's Sister and Sieglinde of Catarina.

Reah of Thorolund appears in Firelink Shrine after the player defeats the Capra Demon. She is accompanied by her two former classmates and current bodyguards, the clerics Vince and Nico of Thorolund.

She will mention that she and her followers are on a mission but never reveals the details. Talking with Griggs of Vinheim before she leaves, will reveal that she is actually after the Rite of Kindling. Knight Lautrec of Carim will reveal, for a sum of souls, that her followers have been killed and that she is trapped below, in the Tomb of the Giants.

Reah is later found in the pit that Patches kicks the Chosen Undead down into, requesting the player to defeat her former followers, now hollowed. After accomplishing this task, she awards the player the Replenishment miracle and makes her way back to the surface. From this point on, she is found in the Undead Parish (next to the corpse that possessed the Fire Keeper Soul) and will sell both basic and advanced miracles to the player.

If Petrus is still alive at this point, he will soon try to assassinate Reah (see notes for details). If not, Reah will remain in the parish until the player exhausts her wares, whereupon she will travel to The Duke's Archives and become hollowed there. There she will be in a cell near the cell that the player was put in after the first encounter with Seath the Scaleless.

Reah is the youngest daughter of the house of Thorolund and of royal blood.[1] 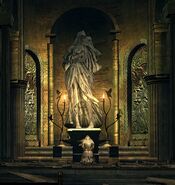 Reah after being rescued

Hollowed in The Duke's Archives