Crystal Lizards who have transformed into ferocious monsters due to consuming vast amounts of souls. They have multiple limbs, a long tail, a fanged maw and their bodies are encased in sharp crystal shards. Considered sub-bosses, they are found in secret areas and do not respawn upon death.

Ravenous Crystal Lizards are usually asleep when first encountered but will awake swiftly once alerted to the player. It is recommended to close in on the creature as soon as the fight begins as it uses a powerful rolling charge at a distance that covers a lot of ground. Evading this charge will cause the lizard to crash into a wall, temporarily stunning it.

At close range, the lizard will alternate between swiping with its tail and a lunging bite, although it will occasionally use a shunt to break the player's guard. As it can attack from any angle, the player should not let their guard down as they circle it. From mid-range, the lizard will use crystal breath to create a line of spikes directly in front of it but this can be evaded by moving to its sides.

Ravenous Crystal Lizards are vulnerable to staggers and repeatedly striking their heads will cause them to rear up stunned for a few seconds. The player can perform a special attack where they impale the lizard in the skull before kicking it away that deals high damage. 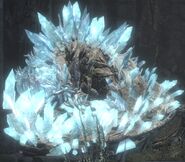 A sleeping lizard.
Add a photo to this gallery

Retrieved from "https://darksouls.fandom.com/wiki/Ravenous_Crystal_Lizard?oldid=308301"
Community content is available under CC-BY-SA unless otherwise noted.