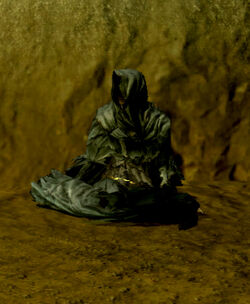 Quelana of Izalith is a character and Pyromancy trainer in Dark Souls. She is voiced by Jenny Funnell, who also voiced the Darkmoon Knightess.

Quelana sits on an island in Blighttown directly in front of the entrance to Chaos Witch Quelaag's lair. The most guaranteed way to encounter her is to level up a Pyromancy Flame to +10. Being invaded by or summoning someone with a +10 or above flame reportedly spawns her as well.

Upon meeting Quelana, she offers to teach the player Pyromancy. After a while, she asks the player to defeat what is left of her corrupted sisters*, Quelaag and the Daughter of Chaos, and the Bed of Chaos to free the consumed souls of her mother and sisters. Upon completing her requests, she gifts the player her final pyromancy: Fire Tempest.

*Despite Quelana implying the player must kill all of her sisters, killing Quelaag's Sister does not contribute towards receiving the Fire Tempest pyromancy.

Quelana was originally a "flame witch" who used fire sorcery. When Izalith was consumed and the demons infested the city, she fled and became the creator of Pyromancy. It is unknown whether the knowledge of fire sorcery was forgotten by her or whether she created Pyromancy as a safer version of it. Quelana passed on her knowledge to Salaman, who in turn passed on his knowledge of pyromancy to the people of the Great Swamp.

According to a developer interview, Quelana and the other Daughters of Chaos are a different species, despite appearing similar to humans.[1] Her in-game model may not reflect her "canon" appearance, with pale, ash-colored skin, as seen in the opening cutscene and achievement art.

Quelana has an unlimited amount of pyromancies at her disposal. She seems to prefer Great Fireball and Fire Tempest the most. Both are very powerful if they connect, but have slow start-ups, allowing players to go for the backstab if they are close enough. Quelana may deal high damage but is physically very weak. Quelana is also just as susceptible to poison as the player is; one can choose to attack her and have her wade into the swamp surrounding her, leading to a slow death. Finally, the Infested Barbarians can also damage her heavily should they chase the player to that point. 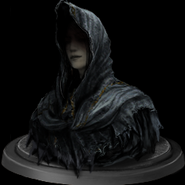 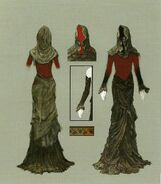 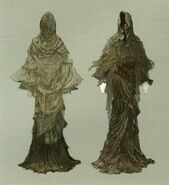